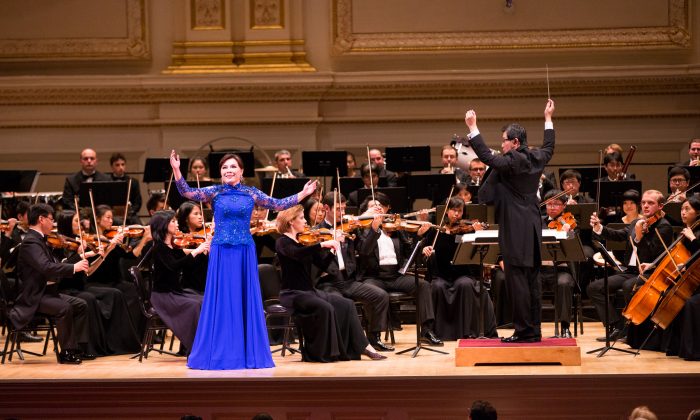 NEW YORK—When Narline Borno walked out of Carnegie Hall on the evening of Oct. 11, she was in awe. It was the most enchanting and unique concert she had ever attended—an orchestra that not only had trumpets and cellos, but also two-stringed Chinese violins.

Ms. Borno, an anthropology student at Brooklyn College and a violist herself, said she was taken aback by the high-level skills of Shen Yun Symphony Orchestra’s musicians.

“I was actually almost breaking down in tears,” she said. “I’ve never heard someone play that precisely and with such emotion.”

The orchestra blends the soul of Chinese music with the grandeur of a Western orchestra. It performs original compositions as well as Western classics such as Sarasate’s “Gypsy Airs” and Tchaikovsky’s “Marche Solennelle.”

Ms. Borno said it was her first time hearing a mixture of Eastern and Western instruments playing together.

“I was in awe at first. To hear it merge together,” she said. “It’s nice to hear the twist.”

Ms. Borno said she was also delighted by the opera singers who sang Chinese lyrics in bel canto style.

“I was definitely very impressed with the opera singers,” she said.

It was not such a surprising combination after all, since ancient Chinese theater and European opera share similar vocal techniques. But bel canto’s original high-note technique has been lost in both Europe and China. Shen Yun’s opera singers are the only ones who are currently reviving this lost tradition.

“I was happy to have a chance to experience this,” Ms. Borno said.

Ms. Borno attended the symphony with her mother, Orline Borno.

“It was amazing, breathtaking,” the elder Ms. Borno said. “I was fully engaged. I’m not a music major, but I enjoyed it and felt the emotions of it.”