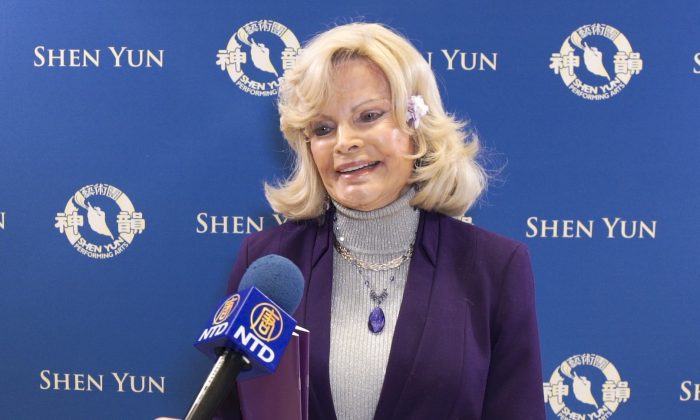 SALT LAKE CITY—Violinist and composer Francine Potter attended a performance of Shen Yun Performing Arts with a friend, and at one moment, she turned so she could see his reaction to the wonders on stage as well, and saw a tear roll down his cheek.

“But they were happy tears,” Potter said, because by the time the finale came around, it was clear to her. There was a message of the divine coming through in the 5,000 years of Chinese civilization, which is said to be imparted by the heavens. And that spoke to Potter.

“[They] were not just presenting ideas out here without something behind them,” she said.

Potter is a composer, violinist, and the concert mistress of Paradigm Orchestra, and previously performed with the Utah Symphony for many years. She is also the former Miss Utah.

As a lifelong musician, the one-of-a-kind orchestra was uniquely enjoyable for Potter.

“When I heard this orchestra, and I saw all those notes, I thought, this is amazing,” Potter said. “I know how much work goes into putting something like that together.”

That Shen Yun travels with a full orchestra is already unique, but the orchestra also blends ancient Chinese instruments into a classical Western ensemble.

“I loved the different sounds of the instruments—it’s like a different personality every time you turn around,” Potter said.

Potter said she had heard ensembles blending different sounds before, but never anything quite like this. It is not easy to arrange music to allow Chinese instruments—which operate on the pentatonic scale—to harmonize beautifully with a classical symphony. The Shen Yun composers need deep knowledge of both grand musical traditions, in order to play to the strengths of each and create a truly unique sound.

“That was unique. I think the dance and the song and the orchestra—in that all combined together was really important, because it gives you more than just any one of them all by itself,” she said. “And the colors, and the dancing, it’s like they’re flying in the air!”

The music gave her inspiration for her own music writing, as did the staging, but perhaps more importantly, she felt a message to pass something on.

“It motivated me to want to do many things, with my music, and with my relationship with other people,” she said. “I know that everyone puts in a lot of time and energy to all of these and I feel like the people that put this together had their whole heart into it.”