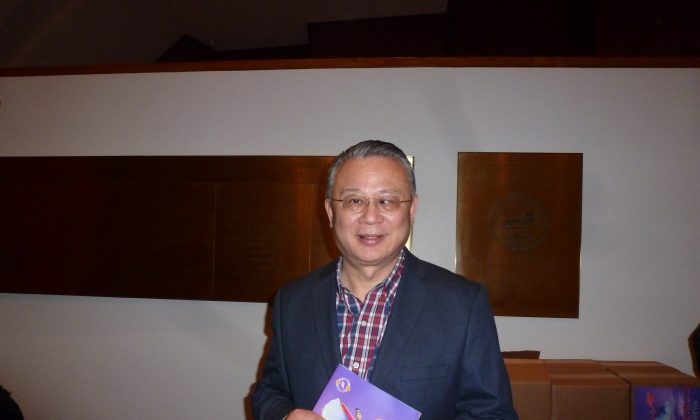 “It gets better every year,” Hua said.

Hua was previously the lead violinist in the Zhejiang Symphony Orchestra in Zhejiang province, China. He now teaches violin at his own music school in Houston after immigrating to the United States. He attended the performance at the Jones Hall for the Performing Arts in Houston, Texas, on Dec. 26.

What makes Shen Yun so special, according to Hua, is they way it connects modern audiences with an ancient and, to many, unfamiliar culture, one that is steeped in profound meaning. The company does this so deftly by using classical Chinese dance as its medium, says Hua.

“The work of Shen Yun is outstanding. No other performing arts company is capable of doing [what it does].”

Tales and records passed down through Chinese history speak to a culture deeply connected with the divine. Traditionally, Chinese believed that people should live in harmony with heaven and earth; and live a virtuous life, striving for moral improvement.

This meaning is capable of being transmitted through classical Chinese dance because of the rigor of the discipline, which demands not only physical but spiritual perfection. Shen Yun dancers themselves seek to convey their inner worlds through their movements by cultivating their character. This way, it is their hope that the audience can experience the meaning of the performance on a deeper level.

Hua said everything from the performers’ skills and fundamental technique to the songs were top quality.

He particularly praised the orchestra which combines both Eastern and Western sounds, by incorporating Chinese instruments into a traditional Western symphony orchestra.

In Shen Yun’s orchestra, ancient Chinese instruments including the erhu (a two-stringed instrument) and the pipa (sometimes known as a Chinese lute) lead the melody on top of a full Western orchestra, creating  a unique yet harmonious layering of sounds.

Hua said there are many Chinese performing arts shows put on by companies from mainland China. But they pale in comparison to Shen Yun Performing Arts. When those shows tour abroad, they are mostly attended by Chinese people, Hua said. Shen Yun, on the other hand, truly appeals to all cultures, becoming known in mainstream society in Western countries like the United States.

“Shen Yun has enabled American audiences to like Chinese culture this much. It’s not a simple task,” he said.

“That is the success of Shen Yun.”

With reporting by Sonia Wu and Cathy He.