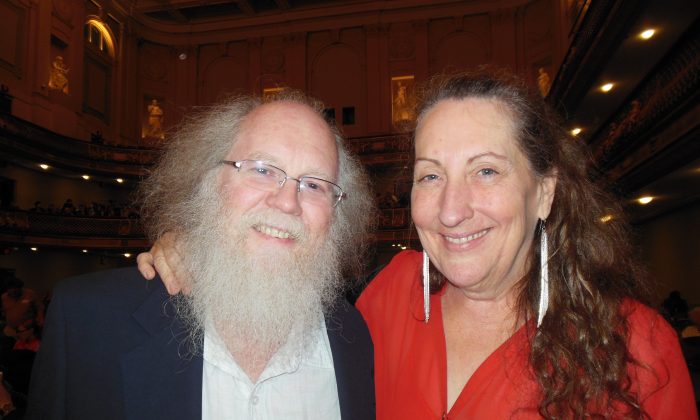 BOSTON—An engineer and director at Salem State University by profession, Stephen Keyes is also a musician who volunteered in community orchestras as a violinist for years. But despite his familiarity with classical music, what he heard at a performance by Shen Yun Symphony Orchestra at the landmarked Boston Symphony Hall on Saturday was unlike anything he’d heard before.

“The performance was extraordinary,” he said.

The focus in ancient Chinese music is to convey the state of mind. Western music emphasizes the effect of the ensemble, so arrangement and harmony are very important. Shen Yun combines these two approaches, according to a video on the Shen Yun website.

As a violinist, Mr. Keyes was particularly interested in the Chinese instrument most closely related to the violin, the erhu. It was the first time Mr. Keyes had seen this instrument played live and he was fascinated and inspired to learn more about it.

This 4,000-year-old instrument is incredibly expressive, explains the Shen Yun website: “[It is] capable of imitating sounds from chirping birds to neighing horses. … In its lowest and middle range, the erhu is especially stirring and somber, a quality eminently suitable for conveying the grand pageant of China’s history and the emotions of its people.”

Mr. Keyes also noted how intertwined a culture is with its music. He recognized the great diversity in Chinese culture—each dynasty throughout history had diverse cultural characteristics, including different styles of music. China’s 50 ethnic cultures also had their different styles.

“It’s such a huge country and it embodies so much culture from the differences from the east to the west, from Hong Kong to the north. You can’t generalize Chinese culture,” he said.

Composer, Junyi Tan explains in a video on the Shen Yun website that Northeastern music tends to favor the suona, a woodwind instrument. South of the Yangtze River, they favor the pipa (Chinese lute). Mongolians use a lot of vibrato, a musical effect consisting of a regular, pulsating change of pitch.

Lucy Schwarz, a computing consultant who accompanied Mr. Keyes to the performance, commented: “[The music] draws heavily from the culture, from the tradition, from the music of the people.” She said they were both intrigued by the culture as a whole and eager to learn more.

Chinese culture is believed to be a divine culture bestowed by the heavens.

Mr. Keyes said he was left with peaceful images in his mind: “I have a lot of nature images in my mind, from water and a field and grasses and apple blossoms and cherry blossoms, just a natural kind of beauty that I have in my mind as I close my eyes and listen to the music.”
Reporting by Sherry Chen and Tara MacIsaac