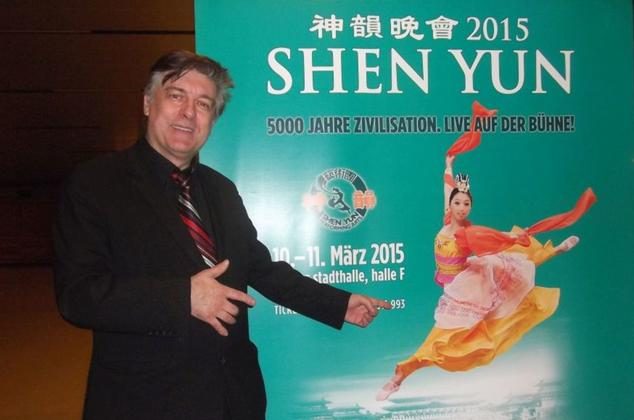 VIENNA—It has been many years since Shen Yun Performing Arts Group performed for the first time in the Wiener Stadthalle, Vienna’s largest concert hall—with 16,152 seats. This year, the Viennese people again looked eagerly forward to the return of Shen Yun.

Introducing the Shen Yun to About 100 People

Mr. John Fox, the owner of John Fox Management & Marketing Corporation has seen Shen Yun for five years in a row and is already looking forward to the 2016 performance.

Every year he introduces Shen Yun to his clientèle and everyone he meets, and this year about 100 people came to see Shen Yun on his recommendation.

“It is important to introduce the show on an individual basis instead of to a crowd, thus the chances of them not forgetting about it once they step outside the door is slim,” he said.

“I wished I had more time to introduce Shen Yun to more people. Most likely, I could have talked to more than 300 people into attending the show. I’m hoping to achieve this goal in 2016.”

Every single person he talked into buying tickets told him “They were flabbergasted by what they experienced and saw during the performance. They didn’t thank me just once, but several times, for making them aware of the show.”

“For me, I think it is thanks enough when I hear the applause. That tells me that I achieved my goal of people coming and enjoying.”

Before stepping outside the venue door, he said, “For me, this show is like a dream. I can go home, go to sleep and have pleasant dreams. The positive energy generated by this show stays with me for some time. That is why I come back year after year.”

‘Today’s excursion to Vienna is an extraordinary event’

Mr. Martin Diewald, an Information Technology (IT) consultant, who is a contractor for a Chinese IT corporation, and his wife, Ms. Maria Diewald, saw a Shen Yun booth at a shopping center and they couldn’t resist buying tickets.

Mr. Diewald enjoyed the show, especially since it was “not only colorful and enjoyable but also critical of modern day events in China.”

His wife agreed with him and was sad that she couldn’t share her thoughts because of her limited German language skills. She explained that she was a native of the Czech Republic, but she did say that she loved the color.

The couples lives some distance from Vienna and Mr. Diewald said, “We come rarely into town for an opera or show. Therefore, today’s excursion to Vienna is an extraordinary event.”

Having learned that Shen Yun is bringing back China’s 5,000-year-old culture, which was almost lost due to the reign of the Communist regime, he said, “It is obvious that this 5,000 year old culture that is coming back now was a very strong and disciplined culture. This can also be seen from today’s dance performances, which are very precise.”

“I’m pleased to hear about the return of the old China and that virtue is given attention again. It pleases me that something that was almost forgotten makes its way back.

Reporting by Alexander Hamrle, Nina Hamrle and Heide B. Malhotra