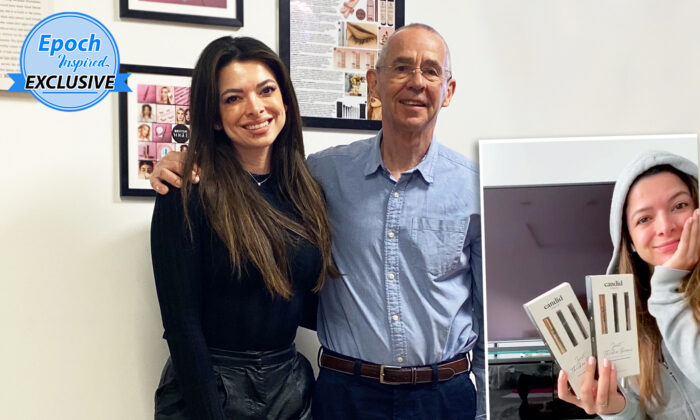 'It’s amazing to think that this all started in my dad’s kitchen.'
By Louise Bevan

A former high school French and Spanish teacher who launched her own beauty brand during the COVID-19 lockdown reaped six figures in sales in just six weeks. As her venture goes from strength to strength, the 30-year-old entrepreneur claims she couldn’t have done it without one special supporter: her father.

Maria Wilkes of London, England, came up with the idea for Candid Beauté when salons closed amid the pandemic.

“It’s amazing to think that this all started in my dad’s kitchen!” she told The Epoch Times. “I will cherish this time forever, and I am so appreciative that he enjoys helping me wherever possible.”

Maria said that, during the lockdown, many people found themselves experimenting with DIY beauty treatments from home. She saw huge popularity in using soap on brows as a “brow lamination” alternative and gave it a try. However, she said not only were her brows a “sticky, flaky mess,” but she also developed an itchy rash.

“Soap is meant to be washed off the skin, not left on all day,” she reasoned.

Maria—the “go to” friend for makeup tips in her clique—noted the effect that glycerin had on her brows. She saw a gap in the market for a new, better product. With no prior business experience, she started researching product development in between classes.

The first person she confided in was her dad, John Wilkes. His response: “Go for it!”

Retiree John, 74, worked for British Petroleum for 46 years as an expert in supply chain management. Home alone in London during lockdown, unable to indulge in his love for travel and the great outdoors, he had plenty of time to help his daughter.

Reflecting on the period when Maria was locked down in Australia for nearly six months in early 2020, John said that his innovative daughter developed the idea of making a brow product.

“She developed not only the basic product but all the marketing, the product container, the packaging, the color coordination, the printing, even down to the font style,” he said. “I was not only of assistance to Maria, but she provided me with something productive to work on during a very difficult and lonely time.”

“It means the world to have a parent who encourages you to chase your dreams and to help make them a reality,” she said.

The fruit of Maria’s labor, a 25.99 pound (approx. US$35.40) clear “Powerbrow” balm, is the product of diligent market research, scouting for recipes and ingredients, registering the business, designing packaging, contacting suppliers and manufacturers, learning how to code, building a social media following and Shopify store, and numerous marketing campaigns.

“I began watching cosmetics formulations videos and bought a ton of ingredients and began experimenting with these in my dad’s kitchen,” she said. “However, we very quickly found that this was too ambitious and we had too little experience.”

So Maria hired a freelance cosmetics formulator to work on the formulation and freelancers to help with her website. Once she was happy with the formula and final sample, she invested her savings into manufacturing the first 10,000 units.

Powerbrow, alongside a line of Candid Beauté lashes and beauty blenders, is now reaching customers internationally. Maria has expanded into a U.S.-based fulfilment center.

The teacher-turned-beauty-guru has built a thriving community on TikTok, documenting her journey from struggles to successes and everything in between. Her friends help promote her brand on their own social media.

John said: “I was amazed that she had achieved such a fantastic-looking product all on her own initiative. It takes a very special person to take a raw idea and develop it into a successful item in the market.”

For Maria, hard work and moral support are crucial to the success of any business.

“Your dreams don’t work unless you do,” she said. “The reality is that you will never feel truly ready, and you will learn the best lessons as you go. The important thing is that you learn from your mistakes.

Asserting that people are the most important part of any business, she said that it is hard for a solo entrepreneur to scale up. “You can’t be in business by yourself,” she added. “You can only scale your business with the right people in the right roles.

“It’s so important to surround yourself with people who are in your corner.”

For John, helping his daughter has generated a wealth of happy memories. The first successful sales figures, and seeing his daughter featured in Vogue and Glamour, are just two of plenty more.

To other parents of entrepreneurial children, John advises an encouraging yet hands-off approach.

“Encourage the children to go ahead. Even if the business fails, they will learn something from the failure,” he said. “Let them start in a small way at first, and build up. Give them guidance, but try not to force decisions on them; let them learn from mistakes.”

As Maria’s business grows, so does her repertoire; the end of 2021 heralds new Candid Beauté product launches, and an expansion into the Middle East and Russia. John will be with his daughter every step of the way.