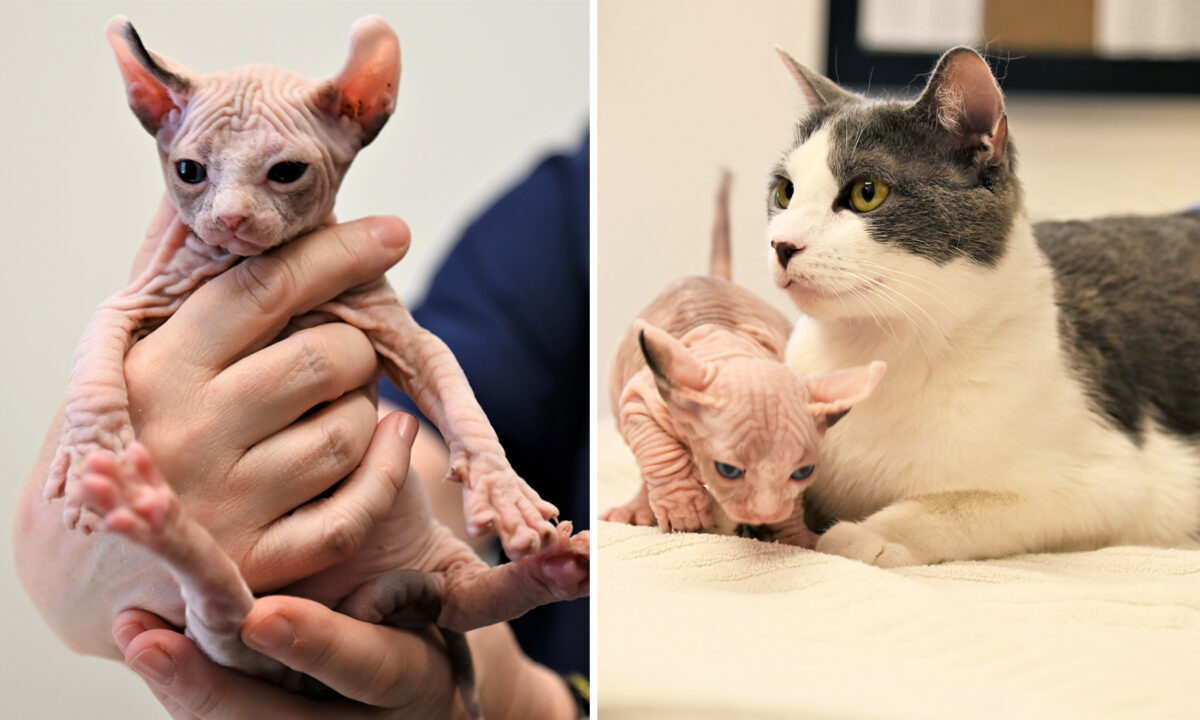 VIDEO: Cat Adopts Frail Newborn Kitten Rejected by Mother into Her Own Litter

A frail, days-old sphynx kitten left at a shelter got the mother’s love she needed to survive when she was “adopted” by another cat at the shelter. Owing to the pair’s sweet bond, the Sphynx was soon thriving and looking for her forever home.

On March 10, a fragile sphynx/American curl-mix kitten, named Cleopatra, was dropped off at Helen Woodward Animal Center (HWAC) in Rancho Santa Fe, California. According to shelter staffers, the owner was desperate; the kitten’s mother had shown no interest in nursing her babies, and the rest of the litter had died.

The shelter took the weak kitten and began a bottle-feeding regime, but knew her best shot at survival was under the care of a mother. Six days later, their hopes were answered when a pregnant domestic short-haired cat, named Bellarina, was transferred to HWAC from a local partner shelter.

Bellarina gave birth to three babies—Bean, Biscuit, and Bunny—three days later. She was an “extremely affectionate” mother, so shelter staffers took a chance, and introduced hairless Cleopatra to the nursing mom and her trio of fuzzy babies.

HWAC Foster Program Supervisor Erin Schmitt said in a press release: “[Bellarina] didn’t just take to her, she fell in love with her. Animals are amazing; it’s as though Bellarina sensed a need in Cleo, and decided to not only provide her nourishment, but to provide her all the love she’d been missing.”

Before long, Bellarina was taking care of frail Cleopatra before her other, stronger kittens. Cleopatra began to thrive, and sweet photos show the purity of the bond between baby and adoptive mom.

The shelter later on shared Bellarina and Cleopatra’s heartwarming story on social media, claiming, “A mother’s love knows no bounds.”

Bellarina, Bean, Biscuit, and Bunny began the hunt for their forever homes at the end of May. Cleopatra, who needed a little extra time for final health checks and her spay surgery, began her search in June.

A private nonprofit founded in 1972, HWAC serves over 90,000 people and 10,000 animals every year through adoptions and community engagement, under the ethos that “people help animals, and animals help people.”

It was both the kindness of people and the indiscriminate love of animals that helped kitten Cleopatra get her second chance at life.