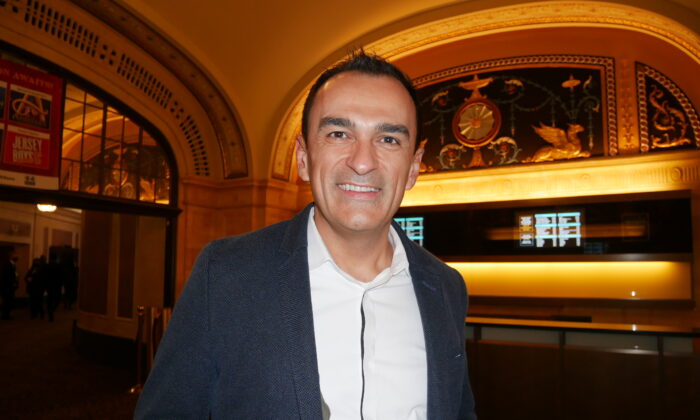 Mr. Balestra said he was impressed with the dances and the costumes, as well as the music.

I felt it was really magical because of the way they dance and the way they use the fabric to dance and create all the flow of the movement.
— Claude Balestra

He said he was particularly impressed by the erhu, also known as the Chinese “two-stringed violin.”

“That was very amazing to see the two-stringed instrument do all that,” he said.

Shen Yun’s orchestra is unique in that it combines classical Western instruments with traditional Chinese instruments, creating a perfect harmony of Chinese and Western musical styles.

“I loved the dancers, loved the songs, different performances,” said Ms. Pavan, who is an engineer. “It was just very peaceful and very calming, and it was a celebration [of life] at the same time.”

New York-based Shen Yun has taken it as its mission to revive China’s authentic traditional culture through inspiring performances that audiences find exhilarating.

“I think it’s super important …  to make sure that the heritage and the culture are held up for future generations,” said Ms. Nistler, who plays the flute and is a vocalist with an Irish music band.

“I think it’s very lovely, between the dancing and the live music. [Shen Yun] really puts together a show [where] you can see imagination and creativity and the history of China.”

She also pointed out the colorful costumes in the performance, which together with the backdrops create beautiful scenes.

“The costuming and the dancing has been inspirational and very artistic,” Ms. Nistler said.

One of the dances, “Insanity During End of Days,” a modern-day story of spirituality and hope, depicts how the Chinese communist regime conducts persecution campaigns against innocent people, including forcibly harvesting organs from detained prisoners of conscience.

The dance resonated with Ms. Nistler.

“They were showing the hospital and the women and the abuse—that really hit me pretty hard. You know it’s there, but you don’t really think about it too often. And so, to see it played live in front of you, that was hitting me,” she said.

Ms. Nistler said she was particularly impressed with the soprano who sang in the classical bel canto style, a technique for singing in the upper register. The technique is known to have been used in early European opera, but according to Shen Yun, it was also in use in ancient China, and the company is reviving it by bringing it to modern-day audiences.

“She was absolutely beautiful at the high notes and [the lyrics were] very dreamlike. Very touching,” she said.