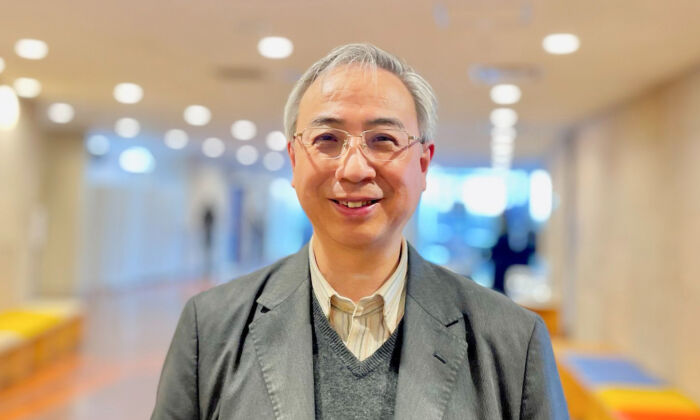 “The male dancers are agile, fast-paced, and intense. You won’t find anyone like them in Japan,” he said. “The female dancers are so elegant and graceful. Their movements are far beyond the skills that Japanese dancers have.”

“The stage and backdrop coordinate with each other seamlessly, as if one entity … the backdrop is so vivid, clear, clean, and beautiful. This technology is really extraordinary,” he said.

He felt it delivered a special cultural value as well.

“The performance presented traditional values and the spirit of the ethnicities. These are very different from Communist China,” he said. “The ancient Chinese people placed great emphasis on the connection between humans and divine beings.”

New York-based Shen Yun is the world’s top classical Chinese dance company, and has a mission to show the beauty and goodness of “China before communism.”

For 5,000 years China’s civilization was built on values and virtues from the spiritual teachings of Buddhism, Taoism, and Confucianism.

‘It Has Just Been Therapy for the Soul’

Mr. Masukawa Masahiro is the director of the Junshan Folklore Museum. He attended Shen Yun with his wife and daughter.

“The show is outstanding. It’s richer than my expectations,” he said. “When the curtain lifted, the stage was full of clouds, and a magnificent scene emerged from the clouds. I was shocked when I saw it. I couldn’t control myself and shouted ‘Wow!’”

Mr. Masukawa was impressed by the dancers.

“From their achievements on the stage, I can imagine how much effort it took. I think they are very admirable. I was very impressed by how great their dances are,” he said.

Mr. Masukawa was surprised by Shen Yun’s orchestra, which blends ancient instruments like the Chinese lute pipa and two-stringed erhu into a classical orchestra.

“It only has two strings but can produce various sounds. Its tone is very soft, and the music is very relaxing and smooth. It has just been therapy for the soul and can the fatigue of daily life,” he said.

‘Now I Want to Know More About the Chinese Culture’

Mr. Shimada Tatsuo enjoyed the erhu as well. He said Shen Yun opened a new door for him, in which he saw the rich Chinese culture.

Mr. Shimada is the factory president of a well-known Japanese electric company. He said Shen Yun is the best in many aspects, such as the beauty of the costumes, the orchestra’s performance, and the dancers’ skills.

Mr. Okazaki Yoshitaka was the president of a transportation company. He said he couldn’t control his tears when he saw the beauty of Shen Yun.

“I have never seen a show as beautiful as Shen Yun. Every aspect is very well designed,” he said. “Wonderful!”

Mr. Watanabe Akira, the president of a company, concluded: “I think the beauty of Shen Yun artists comes from their hearts. … Without having a beautiful heart, a musician can’t compose this kind of beautiful music.”