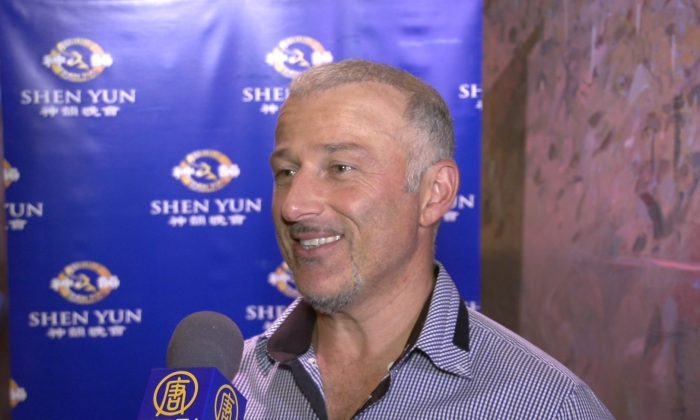 'It all flowed so seamlessly together'
By Epoch Times Staff
Print

“It was quite amazing! The connection between the music, the art, the performance, and even the visual. It all flowed so seamlessly together,” said Vasili Kanidiadis, when interviewed during interval.

Mr. Kanidiadis, a Greek-Australian television personality, best known as the host of TV show Vasili’s Garden, attended the New York based Shen Yun with his wife.

He said he felt “Overwhelmed!” by Shen Yun.

“A sense of balance! … At peace, really, at peace. As simple as that.”

Classical Chinese dance is at the heart of what Shen Yun does, but it also includes a live orchestra of both traditional Chinese and classical Western instruments, handmade costumes and a state-of-the-art digital backdrop.

Mr. Kanidiadis appreciated the synchronicity and the total theatrical effect of each performance.

He said, “in every corner of that stage, as it was a performance for me tonight, no matter which corner I looked at, what performer I was focused on, what instrument was playing, they were all united as one. And that connection that they had together on stage came through to us, and that’s how I felt with them, as one.”

“Over its past 60 years of rule, the communist regime has treated traditional Chinese values as a threat to its existence … bringing traditional civilization to the brink of extinction”, according to the company’s website.

Mr. Kanidiadis loved their struggle for freedom and the representation of China’s divine culture.

He said, “It’s beautiful. … To be able to come here tonight. It’s an honour. It’s a pleasure to be able to experience and see how China and the people are really wanting to break away from what is happening to them. It’s amazing and I wish them, with all my heart, the best. I think it’s beautiful.”

He continued, “We all want peace. We all want harmony. We all want balance. It’s something that we all yearn for as humans. Whether you’re Asian, European, English, it’s all the same, the heart.”

Mr. Kanidiadis felt everyone would benefit by experiencing Shen Yun.

“It brings a sense of understanding and balance to our mind. So, for those who are locked up in this fast-pace, it’s a good opportunity for people to be able to experience this as I have tonight, and learn to slow down and really enjoy the lotus flower. It’s a wonderful plant.”