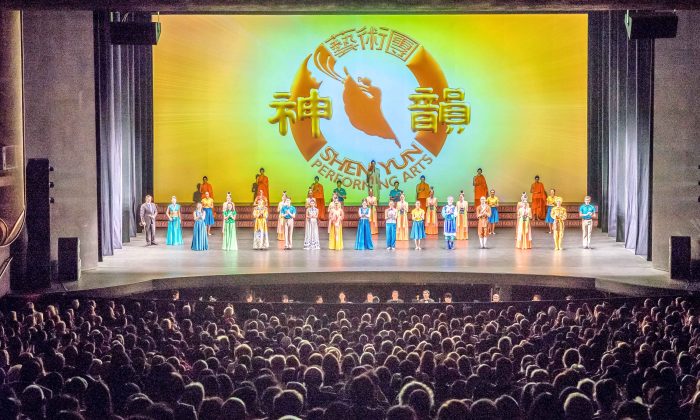 Ken Greer currently teaches dance at Stanford University. He’s been a competitive ballroom dancer for 25 years and an instructor for 10 years. He competes at the International Championship level and has coached with many world champions. His wife, Sheana Schreider, started learning dance at two years of age and has studied ballet, jazz, modern, acrobatics, gymnastics, folk dance, folk ballet, and ballroom. She has performed professionally and teaches dance with her husband at Stanford University.

“I think the choreography, the balance, and the synchronicity is all very beautiful,” Ms. Schreider said. “They’re so graceful! Unbelievably graceful and synchronized and present.”

According to the Shen Yun website, “Classical Chinese dance is composed of three main parts: bearing, form, and technical skill. Other than complete training in the fundamentals, it also entails systematic training in movements and postures, as well as very difficult jumping and tumbling techniques.”

Mr. Greer said it was fascinating to hear about the history of the many dances originating from classical Chinese dance.

“They’re very much uniform, fluid,” he said. “Everything is synchronized so well. … Very impressive movements.”

Ms. Schreider also appreciated the variety. She particularly enjoyed the Mongolian dance, “Drums of the Grasslands.”

It was surprising—surprising and exciting.
— Sheana Schreider

“The moves were so unusual. Some of the choreography was so unusual; I’ve never seen anything like that before. It was surprising—surprising and exciting,” she said.

The website states, “Classical Chinese dance is rich with expressive power. Through expression of bearing and form, beautiful dance movements bring out the inner meaning of intrinsic thoughts and feelings, reflecting the peculiarities of human nature, the standard for human conduct, moral concepts, mental state, one’s value system, and so on.”

Mr. Greer said the Shen Yun dancers were so expressive, it was very clear what they were trying to portray.

“It’s very expressive. As expressive, or more expressive than ballet. Very much freedom of movement. A lot of room to express what is being portrayed,” he said. “I enjoyed that very much, very much. … It is telling a story.”

Patrick Copeland, an engineering director at Google, took his wife and three children to see Shen Yun as a family treat. He said even his five-year-old was captivated throughout the entire performance and that Shen Yun was great for any age group.

“It is beautiful,” he said. “The long sleeve dance was awesome. The costumes are incredible. I really liked the movement and the fluidity of the dancing. It was beautiful. It was very delicate and nice.”

The website states, “Shen Yun dances recount ancient myths, bygone heroes, or celestial paradises. Whether set in the past or in contemporary China, every dance embodies traditional Chinese values. Ideals of loyalty, filial piety, and veneration for the divine are cherished and celebrated. Heroes are extolled for their compassion and tolerance as much as their courage or determination when facing adversity.”

One of the children, William, said “It’s a good show. I like it. All of them.”