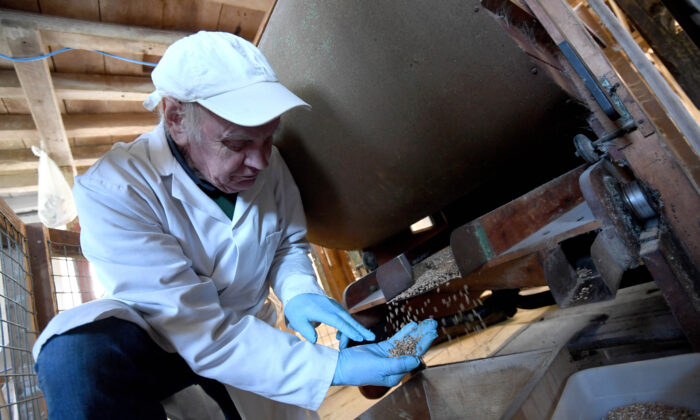 Miller Pete Loosmore checks the grain at the winnower in Sherborne, England, on May 6, 2020. (Finnbarr Webster/Getty Images)
UK

Folic acid will be added to non-wholemeal wheat flour across the UK, the government has announced, saying the addition is aimed at reducing spinal conditions in babies.

The Department of Health and Social Care (DHSC) said 80 countries, including Australia, New Zealand, and Canada, have already been adding folic acid to staple food products.

A shortage of folate (vitamin B9) in the early stages of pregnancy—often before a woman knows she is pregnant—can lead to neural tube defects in the foetus, resulting in spinal conditions such as spina bifida or anencephaly.

British food manufacturers have already been adding the manmade vitamin B9 to breakfast cereals voluntarily, and women who could become pregnant or are planning a pregnancy have been “strongly” recommended to take a 400-microgram folic acid tablet every day before pregnancy and until they are 12 weeks pregnant. But the government wants to increase folic acid intake as “around 50 percent of pregnancies in the UK [are] unplanned.”

Citing successes from Australia, New Zealand, and Canada, the DHSC said it believes adding the vitamin to flour will reduce the number of babies with potentially life-threatening neural tube defects by around 200 each year—around 20 percent of the annual UK total.

“Few things are as important as a baby’s health—and folic acid-fortified flour is a quick, simple win to enhance their development,” Johnson said in a statement.

“This will give extra peace of mind to parents and families, as well as helping boost the health of adults across the country,” he said.

“With the safe and taste-free folic acid baked into the national diet, hundreds more babies will be born healthy each year,” Javid said.

“Focusing on preventing life-threatening health issues such as spina bifida will ensure fewer people will require hospital treatment, and more individuals and families are able to live healthier lives,” he added.

The government said the cost of adding folic acid should be minimal as a number of additives—calcium, iron, niacin, and thiamin—have already been added to flour during milling since World War II.