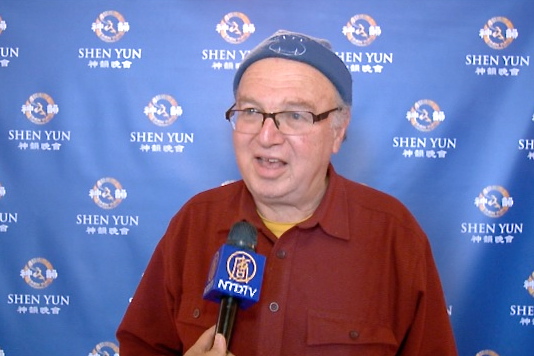 David Zilberman, a UC Berkeley professor of economics, was among the theatergoers for Wednesday’s matinee performance at the War Memorial Opera House on Jan. 8.

“I really love the show, and it’s an excellent show,” said Mr. Zilberman.

Mr. Zilberman is a fan of Chinese culture and has traveled to China several times.

“Fantastic show that shows how rich Chinese culture is,” he said, adding, “which I [will] admire all my life.”

The fact that Shen Yun is based in New York is something that Mr. Zilberman was unaware of before the performance. According to Shen Yun’s program book, “China was once known as the Divine Land, its glorious culture said to have been brought down from the heavens. But under the last 60 years of atheist communist rule, this divinely inspired culture has been almost completely destroyed. That is why you cannot see a performance like Shen Yun in China today.”

Mr. Zilberman enjoyed “the elegance, the style, the athleticism, and the spirituality.”

“The spirituality is very interesting,” said Mr. Zilberman. “It’s very spiritual; it has a religious meaning that I was never aware of and now it’s much much deeper.”

Every year Shen Yun puts on an entirely new production accompanied by the Shen Yun Orchestra, which combines both classical Eastern and Western instruments.

Mr. Zilberman felt that the music of the Shen Yun Orchestra was groundbreaking.

“It’s incredible; it’s the new wave of music that will integrate East and West. That is the way of the future,” said Mr. Zilberman.

“Oh you must see it; it will open your eyes to something that you didn’t know exists. It’s really creative,” he concluded.