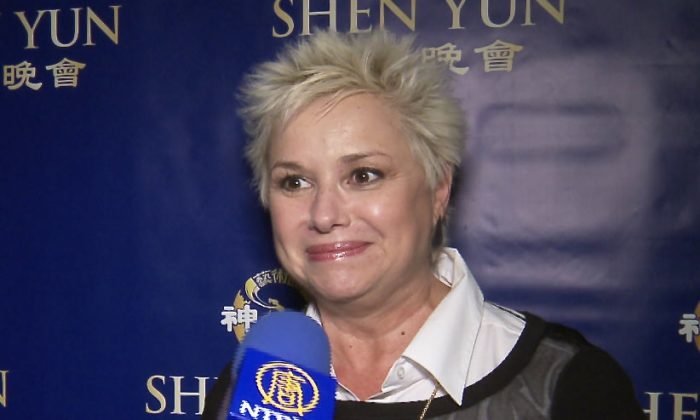 “I love the show. I absolutely love the costumes, I love the scenery, I love the backdrop. Obviously the music is fantastic,” Ms. Prida said.

In fact, the drive of more than 50 miles just to see the New York-based Shen Yun performance was nothing to her.

“It’s worth the drive—because I came all the way from Beverly Hills—so it’s a long drive, but it’s worth it,” Ms. Prida reiterated.

Ms. Prida has worked in Spanish-language television for more than 27 years from a reporter to an anchor and is currently hosting a television show for Azteca America TV Network.

Following a battle with breast cancer in 2001, Ms. Prida became an advocate for women and health issues and has written a book, A Difficult Journey. She also formed The Mayte Prida Foundation in support of women with cancer of which she is president.

As a motivational speaker for many Hispanic organizations, Ms. Prida has also been a keynote speaker for major companies, such as Ford Motors for their Breast Cancer Awareness Campaign.

Ms. Prida expressed herself simply in summing up her feelings about Shen Yun. “I love them,” she said.

“I mean the choreography is amazing. They’re so perfect,” she said. “I love this.”