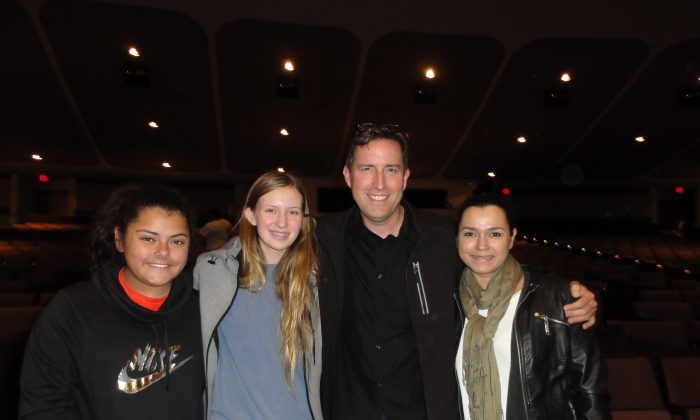 John Carambat with his family at Mahalia Jackson Theater of the Performing Arts in New Orleans on Dec. 26, 2018. (Sophia Zheng/NTDTV)

NEW ORLEANS—Television commercial producer John Carambat felt that he got more than he bargained for after watching Shen Yun Performing Arts for the first time.

“It was so flawless. Everything was beautiful,” Carambat said.

“It was amazing, it was more than I expected.”

The producer at local television station WWL-TV saw the performance with his family at Mahalia Jackson Theater of the Performing Arts in New Orleans on Dec. 26. The New York-based classical Chinese dance company is currently kicking off its 2019 touring season, in which six companies will perform in over one hundred cities across four continents.

Carambat was impressed with both the dancers and the orchestra, whose respective artistry combined to create what he felt was a magical experience.

He commended the skill of the performers.

“You can tell they really practiced hard,” he said. “It pays off.”

Female dancers don a variety of elegant costumes, from different time periods and regions of China, in the dances. Often, elements of these costumes will be used to accentuate the dancer’s movements. For example, during Han (206-220 A.D.) and Tang (618-907 A.D.) dynasties women wore long, wide sleeves. In many Shen Yun dances, the dancers highlight these flowing “water sleeves,” which cascade through the air with the dancer’s ever-changing arm movements.

Carambat credited not just the artists, but the entire production as a whole.

“It was a very tight [production] … all the pieces fit together nicely. It was a nice beginning, middle, and end,” he said. He was surprised by how much more the show offered.

“I didn’t realize it was such a spiritual journey, I didn’t know it was so profound,” he said.

“It just kept getting better and better [as the show went on].”

Shen Yun’s mission is to revive 5,000 years of traditional Chinese culture through music and dance. At the heart of this rich culture is a deep connection with the divine. Indeed, China itself was once known as Shen Zhou, or the Divine Land. Teachings from Buddhism, Taoism, and Confucianism have, for millennia, guided how Chinese people should live, and are imbued at the heart of this ancient culture. Such values are weaved into the stories spread over the course Chinese history and depicted on stage by the company.

But it is not only ancient stories that are portrayed on stage. Shen Yun also reaches into real events happening in modern day China to depict stories experienced by practitioners of Falun Gong, a spiritual group persecuted by the Chinese Communist Party. It was these stories that struck a chord with Carambat.

“It’s sad that there’s such frustration between the Communists and the truth,” he said.

Carambat said people should have the freedom to choose their own belief.

“You take it for granted your freedom, and it’s hard that there’s so many people who are persecuted,” he said.

Falun Gong, also known as Falun Dafa, is a spiritual discipline that was made public in China in 1992. Consisting of meditation exercises and a set of teachings centered on the principles Truthfulness, Compassion, and Tolerance, the practice spread quickly and within seven years around 70 million people were practicing in China alone. Threatened by its popularity, the Chinese Communist Party banned the practice in 1999, in a sweeping nationwide crackdown. People found to be practicing Falun Gong would be sent to prisons, brainwashing centers, and labor camps, where they face torture and even death.

Watching such scenes of persecution on stage prompted Carambat to think of his own situation, living in a free democracy, United States.

“So make sure that you appreciate the freedom that you have here, wherever you are, whatever freedoms you do have,” he said.

Finally, for prospective audience members, Carambat had this to say: “You should go see it. It’s amazing, it’s eye-opening, it’s something that you’re not expecting.”

With reporting by Sophia Zheng and Cathy He.