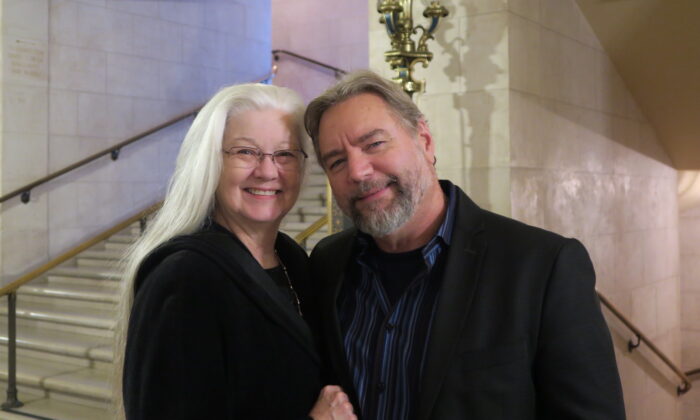 SAN FRANCISCO—The beginning of a new year is a chance to gain inspiration and see the world with renewed optimism. And that’s exactly what one artistic couple in San Francisco discovered in Shen Yun Performing Arts on the first day of 2020.

“The core values of truth and compassion are going to prevail”—that’s the message that Peg Jackson, an artist and violinist, said resonated with her. She attended New York-based Shen Yun at the War Memorial Opera House in San Francisco on Jan. 1, 2020 with her husband, Michael van Auken, who is a professional photographer.

“Very optimistic. This show was our launch to 2020, and it’s been a challenging 2019, and so we’re looking to move on to a better year. This was a perfect launch to that,” van Auken said.

Jackson and van Auken both drew artistic inspiration from Shen Yun, whose mission is to revive China’s 5,000 years of beautiful culture and principled traditions and share them with the world.

“Where do I start?” Jackson said. “I am so impressed with the use of costuming, and the use of contrasting colors. The women’s costumes were like flowers, like dancing flowers, so beautiful. I think it’s called ombré, where it goes from one color to another, in the silk, and the way the silk flows with the air. It really looked like flowers dancing. Especially the colors, they’re so bright. Turquoises, the colors in the poppies, the oranges and purples, and then the contrasting color. When you do that, it makes the colors look even more vibrant. So, I was impressed with that, being an artist.”

Jackson said she may use what she saw in Shen Yun in her art in the future. “The use of color and the vibrant colors, and the sense of movement, how the silk flows with the air, is reminiscent of water, that’s what I’m going to take from it.”

Van Auken, too, appreciated the performance from the point of view of a photographer.

“I did find myself inspired, seeing photographs in my mind. Not to replicate what they did, but use part of that, in some future photography assignments. It was fun. … I was impressed by the contrast of tradition and modern technology in the show,” van Auken said.

As part of reviving authentic Chinese culture, Shen Yun depicts true stories of the deliberate destruction and violence going on today against such traditions at the hands of the communist regime. Jackson said these dance pieces left the biggest impression on her: “The ones where they had more modern-day fighting, I guess it’s the communism versus students, I guess that’s what’s going on in China now, so that was especially poignant.”

With reporting by Michelle Yang and Brett Featherstone.