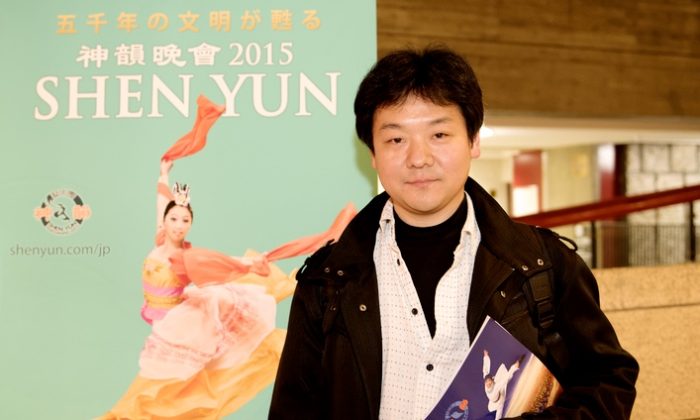 TOKYO—”The synchronization between music and animated digital backdrops is perfect; the blend of performers on the stage and the digital backdrops is seamless and the coordination of Chinese musical instruments and Western orchestral symphony is amazing,” said trumpet instructor Yosihiro Samata, after he attended Shen Yun Performing Arts New York Company’s 2015 premiere, at Tokyo Bunka Kaikan, on April 18.

Mr. Yosihiro Samata was fascinated by the dance depicting Chinese legendary stories. He explained, “The performance about the 5,000 years of Chinese culture is indeed very good. In particular, some of the stories in the program are familiar to Japanese. I think it’s very wonderful. The dances are exquisite and costumes are vibrant. Many pieces are very interesting, among others, the programs about The Romance of Three Kingdoms [Capturing Arrows with Boats of Straw] and The Record of a Journey to the West [Monkey King and the Skeleton Demon]. I feel these programs are truly magnificent.”

I feel it’s wonderful.
— Yosihiro Samata
Impressed with the piece The Power of Compassion, he noted, “To those evildoers, they are repeatedly advised to be good. Although they are evil perpetrators, instead of being attacked, they are saved to the largest extent. I think it takes a lot of courage and compassion. I feel it’s wonderful.”

He hopes all young people can see Shen Yun.

“I am truly very lucky that I didn’t miss such a wonderful performance. It’s a predestined relationship,” said Ms. Tomomi Yasu, a Japanese musician who happened to find out about Shen Yun when she visited the museum next to Tokyo Bunka Kaikan.

She further said, “As a singer, I often attended various kinds of performances. But I’ve never seen something like what performed by Shen Yun. It’s indeed spectacular.”

“These young dancers are full of energy. I can feel the energy. I really hope to understand it more.”

“Though I don’t know much about China, I do know that many Japanese are Buddhists too. After seeing the show today, I am sure that Japan and China have close connections. I think it would be great if we could have more this kind of performance (in Japan). I hope all of young people can see the Shen Yun show.”

In terms of the piece The Power of Compassion, she noted, “It’s great to spread the message of compassion through classical dance. If it’s told, many people may be unwilling to listen to it. It’s meaningful to showcase it in artistic forms, and it would be more understandable.”

“After returning home, I’ll tell my friends [about the Shen Yun show] on my Facebook,” she stressed.