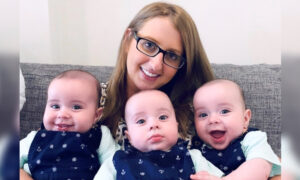 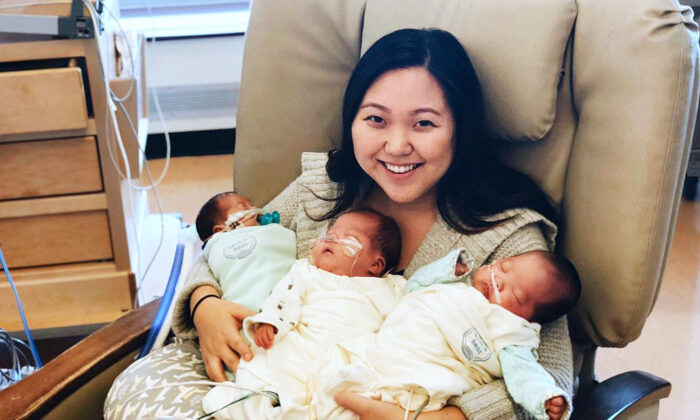 Triplet Mom Learns It Really Takes a Village to Raise a Child: ‘You’re Not Alone!’

After a devastating miscarriage, a newly expectant mom learned that she was carrying not one but three babies. The journey that followed was a crash course in how to ask for help when life gets overwhelming.

“But as quickly as all of my best plans filled my head, they were just as quickly whisked away,” Rachel said in her life story she submitted to Love What Matters. “I had an early miscarriage.”

“[F]or the next year and a half, I struggled with unexplained infertility and all the anxiety, depression, and loneliness that came with it.”

Rachel said she always thought she could handle all her problems on her own and always “hated the thought of being a burden to anyone.” The grieving mom kept her suffering secret.

“I also hated the thought of anyone pitying me or seeing my struggles as being weak. It was really a pride issue for me,” she wrote.

“But God saw through my facade, my need for full control, and called my bluff when he surprised me with triplets.”

After taking a prescription medication to stimulate ovulation, Rachel discovered she was pregnant again on Mother’s Day 2017. However, she expedited her first OBGYN appointment when she started to bleed.

Rachel was fine, but the ultrasound reaped a shocking revelation: There were three sacs in her uterus. “My heart stopped, and all of a sudden I was terribly confused,” she recalled. “‘No way,’ I said to the sonographer, half smiling and fully hoping she was making a joke.”

Rachel’s husband simply asked, “How are we going to do this?”

With little idea of the trials and triumphs in store for their family, the couple left the OBGYN’s office that day.

They quickly found solace, however, in a vast community of people sharing similar experiences. Rachel found a Facebook group for mothers with triplets. The nervous mom-to-be was no longer alone.

“[T]group had over 500 members! Women from all over the globe who were currently going through the same shock, anxiety, struggles, and joys of raising triplets,” she said.

Rachel had her first contractions at 27 weeks, not unusual for a mother carrying triplets. Placed on hospital bed rest, Rachel received visitors, one of whom was a local mom.

“I couldn’t believe someone I had never met went out of their way to reassure me everything was going to be alright,” said Rachel, “but what comforted me more was that her reassurance came from a place of experience of having triplets herself.”

“My husband and I would only go home to eat dinner and sleep so we could drive back to the hospital in the morning,” she said. “Going to the NICU and spending time with our babies, holding them skin to skin for hours at a time … then coming home at the end of a long day became a full time job for us.”

The couple’s neighbors, friends, and family rallied round, dropping off meals, baby clothes, toys, and diapers, and making sure the house was clean. Slowly but surely, Rachel started meeting her new mom friends for monthly dinners, and the babies came home.

When Rachel’s husband returned to work, she found herself alone in the middle of a logistical nightmare.

“I faced a new struggle of juggling everything on my own. I had a hard time letting others in to carry my load when I obviously was bursting at the seams,” she said.

Yet, as soon as she let go of her doubts, Rachel found herself with a plethora of willing babysitters, many “ecstatic” to spend time with the adorable triplets.

“I learned all of my longstanding fears of feeling like a burden or feeling pitied simply weren’t true. People were more than happy to offer a helping hand. They didn’t see me as a burden,” she said.

Rachel now chronicles the lives of her growing triplets on Instagram.

“It’s very common for new mothers to feel isolated,” Rachel said. “If it’s true when they say it takes a village to raise a child, imagine the amount of help I received to care for my triplets.

“Don’t be afraid to reach out and ask for help,” she advised, “because you’re not alone.”