Traditions Keep Us Anchored in Times of Trouble, Says Robert A. Destro 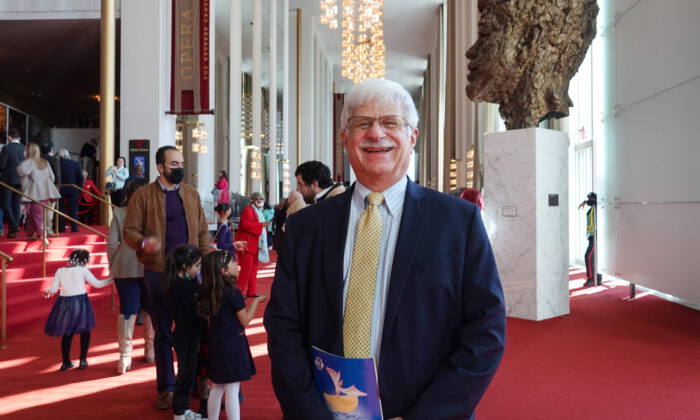 “I think [Shen Yun] brings a lot of hope. Our traditions are what keep us anchored in times of trouble like now [with the pandemic.]

“But I also think it tells a very important story about the human rights violations that are happening in China today. I think all of that, in one package, it’s a lot to take in and I’m really honored to be here today.”

Destro served as Assistant Secretary of State for Democracy, Human Rights, and Labor from 2019 until 2021. He is now a professor of law at The Catholic University of America’s Columbus School of Law.

Shen Yun performs worldwide to revive China’s traditional culture through classical and folk dance and music to millions of people. However, the company has been banned from performing in China by the ruling communist regime.

I really hope that the people in China someday will be able to see this on stage like we are.
— Robert A. Destro

“I’ve been to China … and the idea that you can’t see this in China is just pretty unbelievable, so I really hope that the people in China someday will be able to see this on stage like we are,” Destro said.

Shen Yun’s dances narrate both the history and fables from China’s colorful past, and also present stories of courage in modern China with the regime’s persecution of an ancient peaceful spiritual practice known as Falun Dafa.

Destro said he was aware that Shen Yun presents the lack of religious freedom and abuse Falun Dafa adherents face in China at the hands of the communist regime.

“Well actually, I knew that this was part of the story. I was really interested to see how [the dancers] did it,” he said, “and I think the way they did it was just spectacular! I mean, it’s a very hard and very difficult story to tell. I think the way they told it was actually quite interesting.”

Traditional Chinese culture is defined by its spirituality. Ancient China was known as the ”Celestial Empire,” one where the divine and the mortal coexisted in harmony.

After watching Shen Yun, Destro said that this had been his first experience of China’s spiritual culture.

“That was very interesting. Well …. we don’t really learn much about Chinese [spirituality,] and so, it’s a really deep tradition and I have to go [and] learn more,” he said.

Shen Yun is also accompanied by a live orchestra, which is known for its unique harmonization of traditional Eastern and classical Western instruments.

“The music is beautiful! I mean, the merging of the western and eastern musical instruments is just beautiful. It’s just seamless,” he said.

Destro could feel positive energy emanating from the stage, which he said generated optimism.

Kevin Demski, deputy department manager of engineering and maintenance at Reagan National Airport, was also in the audience.

“[The emcees] did a good job of previewing each scene … and then seeing the emotion in the players acting out the story, it just made me feel emotional,” he said.

His emotions were triggered when he learned about the respect that the ancient Chinese held for the divine and the harmony between heaven and humankind. Demski says he believes it’s for that reason that China’s ancient culture thrived for thousands of years.

“Well, one thing I did like is the positive outlook, that everyone is brought here with divinity and the possibility to do good things, but that bad things happen. And I think it’s impressive that [Shen Yun] looks back on the times before there [was] tyranny and on some of the things that were taken away from the culture by the Communist Chinese,” Demski said.

“I think they explained that well and it’s a very deep feeling to think of something that beautiful being taken away.”

Demski was inspired by the perfect synchronization achieved between the dancers and musicians.

“I think about how hard [the performers] worked to become so good at what they do. And, of course, I’m an older gentleman and I’ve been blessed with some successes but I think about my son and future generations … that if they could get this message early in life, how wonderful that would be,” he said.