Traditional Values Must Be Brought Back, Says Professor of English, After Watching Shen Yun 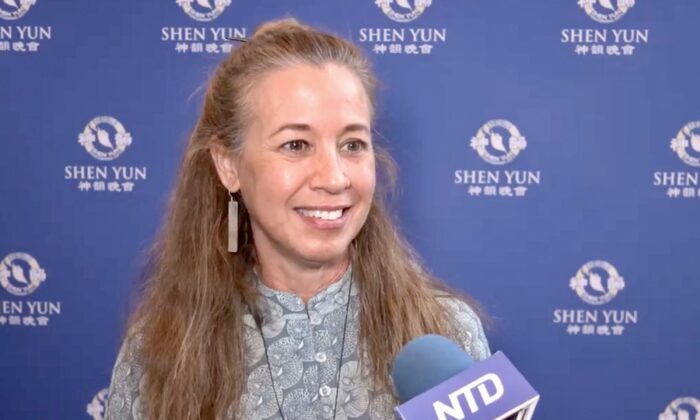 PALM DESERT, Calif.—The world’s premier Chinese classical dance and music company, Shen Yun Performing Arts, played at the McCallum Theatre in Palm Desert on April 30, to the delight of Nicole Kanahele-Stutz who had waited to see the performance for many years.

“It was wonderful … and it was everything I thought it would be,” said the professor of English composition.

Shen Yun translates as “the beauty of divine beings dancing.”

“I think that’s exactly what it is,” Ms. Kanahele-Stutz said. “When everything comes together for the dancers you can tell that they feel beautiful.”

New York-based Shen Yun is made up of seven companies that travel throughout the world with a mission of reviving China’s true traditional culture as it was before communism.

Ms. Kanahele-Stutz was entranced by the beauty of the performance, the colors, and the precision of the dancers.

“And I really enjoy listening to the history … [the hosts] gave me information and knowledge and that’s what I really enjoyed,” she said.

While Ms. Kanahele-Stutz loves all forms of dance, it is Hawaiian hula dance that she herself practices. She remarked that while Shen Yun’s dances portray stories, they are also about beauty, which she appreciated.

According to legend, Chinese culture was passed down by heavenly beings to earthly mortals, thus imbuing its traditional arts and teachings with values such as truthfulness, compassion, and loyalty.

“For the most part, most of us believe in a Creator and so I think that that message should be able to be appreciated by everyone,” she said.

“I think that’s what [traditional] culture is, and I think that’s what makes it beautiful, being able to share your values. When I look at someone’s culture, I don’t look at what kind of trinkets can I buy from [the] culture. I’d look at the things that express [the] values and divine movement of the body. That to me suggests [that] people … appreciate what their Creator has given them,” she said.

“More love, more compassion, more thinking of your fellow man, maybe a little more than yourself, more being able to work hard, being able to take care of our bodies, watch what we put into them, move them around, not be so sedate and lazy. I think all of those values are very relevant for today and if we would embrace traditional cultural values, I think we’d be a lot better off,” she said.

Watching Shen Yun had been a time of relaxation, she said.

Ms. Kanahele-Stutz would strongly encourage her friends to see Shen Yun. They would witness the dancers’ dedication to their culture, and discipline in performing their dances, all of which is accompanied by sheer joy, she would say.

“[Shen Yun] uplifted my spirit. It was wonderful,” said Mr. Stutz. The performance was unbelievably well done—the music, the dance and the humor.”

“I feel like a better person,” he said, after watching Shen Yun.

“It just made me lift my thoughts to the divine and again, realize that there’s many good things in the world that we share …  and it’s fun to see a [performance] like this that helps us to recognize how much love there is in the world,” he said.

“I think if we would all elevate our thoughts to the divine, the world would be a better place.”

For many people who had suffered during the pandemic, Shen Yun had been a therapeutic experience.

“I think that over … the last three years there’s been a lot of fear … and to come to see [Shen Yun] helps us to realize that the world goes on, good things are happening and just elevate our thoughts to the good,” said Mr. Stutz.