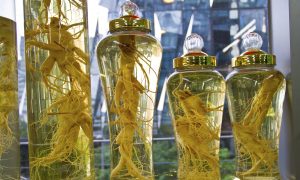 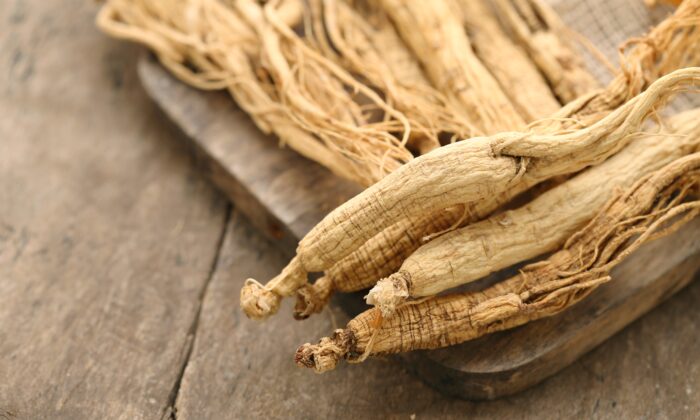 Did you know that ginseng, a root-based plant, has wonderful health benefits for your brain and heart and protects the natural functioning and balance of your entire body?

In fact, the healing properties of ginseng have been known in Asian medicine for thousands of years, and the highly prized herb was once worth its weight in gold. The primary components in ginseng believed responsible for its broad spectrum of therapeutic properties and studied by modern scientists are called ginsenosides.

Scientific evidence in both basic and clinical research is growing on the amazing abilities of ginseng as neuroprotective, cardioprotective, liver protective, and as a treatment for serious diseases such as cancers, diabetes, and illnesses caused by oxidative stress and inflammation. Ginseng has also been found to improve immunity, energy, and sexuality.

Ginseng has the potential to increase cognitive ability for those with Alzheimer’s and can alter gut microbiology by affecting the expression of apoptosis proteins. This neuroprotective effect and positive changes in the large intestine microbiota were demonstrated in a study of tree shrews.

Hydroponically cultivated red ginseng, wild-growing white ginseng, and a placebo were studied for effects on the brain activity of healthy elderly subjects during relaxation and mental challenges over four weeks. Both ginseng treatments resulted in higher memory, attention, and mental performance compared to the placebo but the red ginseng also had stronger mood and calming effects on subjects.

Ginseng also has anti-obesity, anti-diabetic, and cardioprotective effects. Findings of an in vitro study of ginsenoside show ginseng inhibits the proliferation of vascular smooth muscle cells through G0/G1 cell cycle arrest and eNOS/NO/cGMP pathway activation. This gives it strong potential to prevent and treat cardiovascular diseases.

Eighteen research studies with 1,549 participants were meta-analyzed. Ginseng was more effective than nitrates for treating ischemic heart disease in general and angina pectoris in particular.

Ginseng also helped patients with congestive heart failure in a study of 54 subjects. Those treated with ginseng had better balance in important thyroid hormones, which helped increase the cure rate and effectiveness of existing therapies compared to the control group.

In an in vitro study, a treatment of ginsenoside Rg3 balanced cholesterol and triglyceride levels and activity of AMPK, a major regulator of energy metabolism. American ginseng was safe and effective in glycemic control in Type 2 diabetes patients.

In a rat model of nonalcoholic fatty liver disease induced by feeding a high-fat diet, ginsenoside Rg1 was administered for eight weeks, resulting in improved liver function and remission of the disease, showing that ginseng could be a highly effective liver protector in humans.

In a meta-analysis of 18 trials comprising 1,531 patients, treatment with ginsenoside Rg3 combined with chemotherapy improved the clinical efficacy and alleviated treatment-induced side effects for digestive system cancer.

The combination of treatment of calcitriol (an active component of vitamin D) and ginsenoside Rh2 were studied in vitro with human prostate cancer cells and results showed inhibited cancer cell viability up to 80 percent, lowered cancer cell proliferation, and increased pro-apoptotic actions using this synergistic combo as an anti-cancer treatment.

In a systematic review of 200 studies on the treatment of multiple cancers, scientists learned that ginsenoside Rh2 not only exhibits the anti-proliferation, anti-invasion, anti-metastasis, induction of cell cycle arrest, promotion of differentiation, and reversal of multidrug resistance activities against multiple tumor cells, but also alleviates side effects from chemotherapy or radiotherapy.

Six healthy adults who regularly consumed a Western diet and received seven days of oral American ginseng had higher levels of ginsenoside compound K and higher cancer prevention potential compared to those on an Asian diet.

Targeting microRNAs using small chemical molecules has become a promising strategy for inflammatory disease treatment. In an in vitro study, the use of ginsenoside Rb2 effectively tamped down the inflammatory responses of the microRNA miR-216a associated with endothelial cell aging and atherosclerosis via the Smad3/NF-κB signaling pathway and highlighted its anti-inflammatory benefits.

Depression-like behaviors caused by chronic stress are related to inflammation and microglia activation as well. Ginsenoside Rb1 was effective in countering depression in a chronic restraint stress-induced model of mice and showed positive anti-inflammatory effects in the hippocampus, serum, and microglia and de-activated cell signaling proteins often associated with cancer, diabetes, cardiovascular, and neurological diseases.

Treatment with Korean ginseng in an arthritis-induced mouse model showed that ginseng has similar analgesic (painkilling) and anti-inflammatory effects as ibuprofen without the side effects, suggesting it as a potentially safer rheumatoid arthritis treatment.

Accumulating evidence shows that natural medicines, such as ginseng, can treat atherosclerosis (lesions in the artery wall that can lead to reduced blood flow) by inhibiting endothelial cell apoptosis (cell death), which can be aggravated by oxidative stress from oxidized low-density lipoprotein, reactive oxygen species, tumor necrosis factor-α, homocysteine, and lipopolysaccharides.

In a study of ginsenoside Rb1 of 197 patients with chronic kidney disease, those who received 500 milligrams (mg) per day of ginseng for six months showed increased renal function and reduced oxidative stress and inflammation, which slowed the progression of the disease compared to the control group.

Ginseng has long been a valuable natural therapy and its worth is only rising as the scientific community analyzes its medicinal advantages to protect your body from diseases and restore your health and well-being. For in-depth research on ginseng, see the GreenMedInfo.com database with over 1300 abstracts, relevant to over 350 conditions across 150 distinct pharmacological actions, all viewable here.

Dr. Diane Fulton is a professor emeritus at Clayton State University. She holds a Ph.D./MBA in business (University of Tennessee–Knoxville) and a bachelor’s with math/secondary education majors (University of Wisconsin–Milwaukee). During her 45-year career as an administrator/professor teaching research and business, she authored 10 books, over 50 articles, and is now writing children’s books about the body, mindfulness, and cross-cultural awareness. Her passion is to share her knowledge to integrate a healthy body, mind, and soul. This article was originally published on GreenMedinfo.com