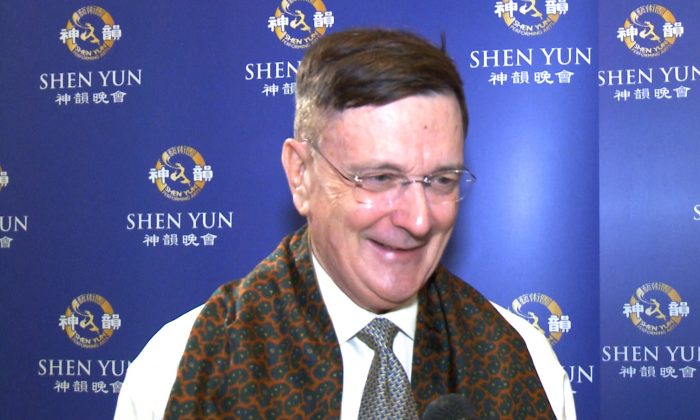 ‘This is just a joy to watch,’ Says BOSU Fitness CEO

NEW YORK—Thomas Weck bought a front row seat for his third Shen Yun performance so that he could sit up close to watch the dancers.

“This is just a joy to watch.” “I’m mesmerized by their synchronization, and their skill, and their core stability, and the way they use their feet and their hands to be so expressive,” said Mr. Weck.

Mr. Weck is CEO of BOSU Fitness, which is known for balance training and its BOSU Balance Trainer, widely sold in retail stores.

Mr. Weck said Shen Yun inspires him to try harder in his profession. “I’ll never get even remotely close to where they are,” he said.

According to Shen Yun’s website, “classical Chinese dance is grounded in 5,000 years of divinely inspired culture, and is a dance art form built upon a deep foundation of traditional aesthetics.

“Through expression of bearing and form, beautiful dance movements bring out the inner meaning of intrinsic thoughts and feelings, reflecting the peculiarities of human nature, the standard for human conduct, moral concepts, mental state, one’s value system, and so on.”

Mr. Weck said he studies the feet, the hands, and the body postures of the dancers in order to learn from Shen Yun.

“These performers are at the top of their profession,” he said. “I think—the most enjoyable dance form that I have ever seen.”

“They don’t miss a second. It’s really a fine expression of art in all its respects. It’s a privilege to be here,” he said.

Mr. Weck commented that Shen Yun’s mini-drama pieces, which tell stories and legends from China’s history are “captivating.” He added that Shen Yun’s use of an animated backdrop to interact with the dancers, is “unique,” “perfect,” and “exquisite.