‘There Is a Purity Here,’ Says Author About Shen Yun 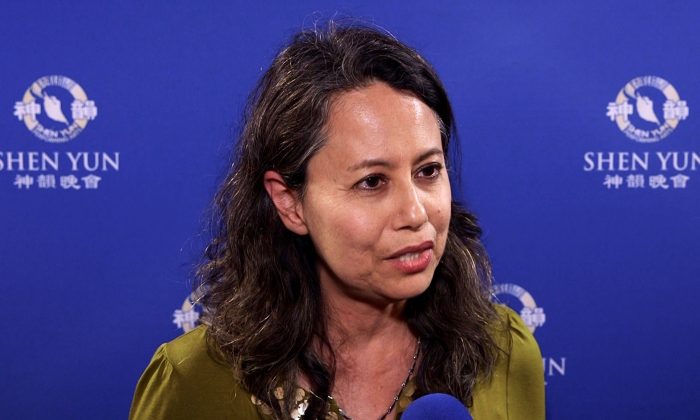 SANTA BARBARA, Calif.—Author Avia Belle Moon attended Shen Yun Performing Arts for the second time at the Granada Theatre on April 29 and was again moved by her experience.

“It is something so beautiful. It is elegant,” she said. “It is very touching for me, when I see this. I get so emotional, because there is a purity here.”

Traditional Asian culture is very important and personal for Ms. Belle Moon. She is half Asian and lived in Japan for more than 16 years, and one of her novels, “A Thousand Years of Love,” was set in ancient Kyoto, Japan and Hangzhou, China. She said that because of her research and travel over the years, she has become very familiar with ancient Chinese culture, which is very different from modern Chinese culture.

“We have to preserve this aspect of Chinese culture,” she said. “This is the kind of culture that I want to see promoted in the United States.”

Shen Yun’s mission is to revive this 5000-year history of authentic, divinely-inspired Chinese culture, rooted in the spiritual traditions of Confucianism, Taoism, and Buddhism, which has been nearly lost in China today.

Through the universal languages of music and dance, New York-based Shen Yun takes the audience on a magical journey through ancient Chinese myths and legends to modern heroic tales. A live orchestra with both Eastern and Western sounds compliments the dances, while stunning backdrops, colorful flowing costumes, and musical soloists enrich the performance.

“It is lovely, just made me happy to come here, because I have a lot of stress and problems in life, so when I come here, I can just forget about it for a few hours,” said Ms. Belle Moon.

The author was very impressed by the energy and vitality of Shen Yun’s dancers, who are trained in classical Chinese dance, an art form perfected over thousands of years.

She was also touched by the lyrics of the vocal soloists, which she felt introduced some of the traditional spiritual and philosophical ideas of Chinese culture.

Ms. Belle Moon said modern Chinese culture is tainted by the pursuit of money and power and the destruction of the environment. However, art has a soft power that can create peace. She said this is one of the reasons why she wrote her book, “A Thousand Years of Love.”

“Arts and culture are weapons of mass construction,” she said. “These are the weapons we need, our arts and culture. Without that, we won’t have civilization.”

These ideas are kind of old-fashioned, said Ms. Belle Moon, but this is what she would like to do with her art. She felt that coming to Shen Yun Performing Arts was more than just watching a performance. She felt a deeper meaning of protecting arts and culture and providing salvation itself to the world.

“I want to promote peace through culture. This is all we have now,” said Ms. Belle Moon. “This show is so important. I really feel that.”