‘There Is a Lot of Heart in It’: Artist Praises Imagery, Talent in Shen Yun 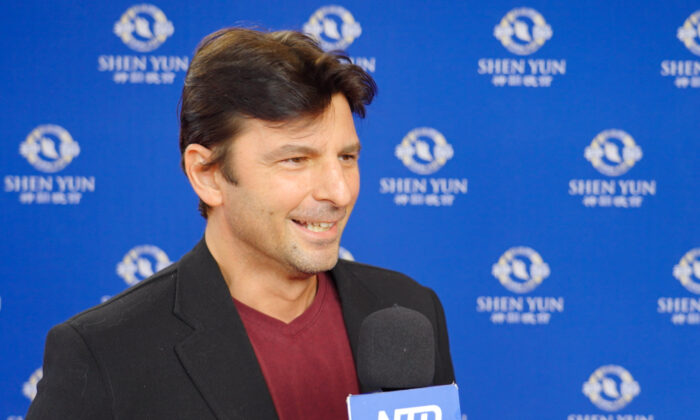 MONTREAL—Artist Didier Mercadal says the various elements of Shen Yun Performing Arts work together to create a stunning image on the stage, one that almost moved him to tears a few times.

“We realize at a level that dance and image are one and the same in this show. It’s extraordinary, because the costumes, the music—everything is thought of as a visual picture,” said Mr. Mercadal, who is a comic book illustrator.

“The unity and the choreographies that are done in a very precise and synchronized way, it tells a story. We know that, but visually it’s a combination that is already thought out and it’s made to be seen as a vast picture in fact, and yet each individual person brings something important [to the performance].”

Mr. Mercadal said he was particularly moved by the opening scene, which shows a “sublime and lofty paradise” as explained in the program book.

The opening scene is so aerial, and emotionally it’s so striking that my heart was full at that moment.
— Didier Mercadal

“The opening scene is so aerial, and emotionally it’s so striking that my heart was full at that moment. I think I almost cried,” he said.

“From the Yellow Emperor of antiquity to the splendor of the Tang Dynasty all the way to the exquisite elegance of the Qing, the lineage of Chinese civilization runs five millennia deep. It is a story brimming with heroes real and imagined, their legacy preserved in tales of courage and sacrifice, integrity and loyalty, compassion and virtue,” reads the Shen Yun website, explaining the rich heritage of the Chinese culture.

Mr. Mercadal said he found commonalities between the values presented in Shen Yun with those in the Western culture.

“We all have a fundamental common ground in fact,” he said. “We may speak differently, but speak of the same things in the end.”

Mr. Mercadal also pointed out that Shen Yun doesn’t just provide a simple snapshot of China’s culture, but rather a holistic understanding of the ancient culture.

“It’s for that reason that it’s necessary that one sees it several times,” he said.

What makes Shen Yun very special, Mr. Mercadal said, is the fact that Shen Yun’s artists put their whole heart into their work, an aspect that shines through the performance.

“I looked at the program. The composers and others are extremely skilled and organized people. I believe that there is a lot of heart in it, it’s not just a product in fact. They do it with a thought behind it, and I think it touches people if you are open enough to it,” he said.

“It takes extraordinary determination by the artists to get to that level [of skills].”

As a visual artist, Mr. Mercadal said he was fascinated with Shen Yun’s patented animated backdrop, which allows for interaction between performers on the stage and the projected images in the background.

“It’s a system that is mind-blowing, and it gives a lot of room for creativity to the artists who create this show, with the interactions between the 3-D set and the characters in the foreground. It’s extraordinary,” he said.

“Everything is well-elaborated [in the backdrops], extremely precise with the colors, the matching features. It’s astonishing. It’s a feast for the eyes.”

Shen Yun is a performance that shouldn’t be missed, the illustrator added.

“It’s the first time I’ve attended, and I already want to see it again.”