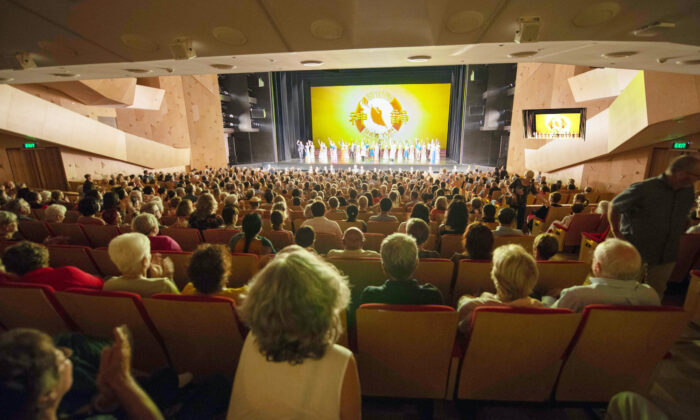 AUCKLAND, New Zealand—Joseph Lipanovich and his wife, Suzanne, both have an extensive background in theater which gave them the ability to recognize the world-class performance of Shen Yun Performing Arts, at the Kiri Te Kanawa Theatre, Feb. 29.

Having been involved in cultural dancing from his own native country, Croatia, Mr. Lipanovich was able to appreciate the high standard of the Shen Yun’s ethnic and regional dances.

“The physical energy that’s expelled on that chap on the stage—I’m overwhelmed because we do our own cultural dancing … so we appreciate the energy that they have had to put into it,” said Mr. Lipanovich.

“I just thought it was wonderful how [the dancers]  brought their faith into the whole scenario. Obviously, faith gave them the strength. I guess without their faith, they just couldn’t do all that amazing stuff they do. What a journey they are on. It’s just amazing,” she said.

Mr. Lipanovich agreed. “It was just overwhelming because the modern world is so busy worrying about the material life, and it’s sad. They don’t know how to appreciate what we are made of, and that’s the soul and love and caring for this wonderful world that we’re given to live in.  It was just magnificent. I just enjoyed every moment of it.”

“That was just overpowering. In fact, I actually felt it going through my veins,” he said. He added that he even played healed. “I had to bend down and touch it to make sure that it was me, not the music, coming through my physical being.”

Thanks to Shen Yun‘s performances, the world will be a happier place, said Mr. Lipanovich. They have given us “happiness and positivity.”

With reporting by NTD Television Grace Coulter and Diane Rowe.