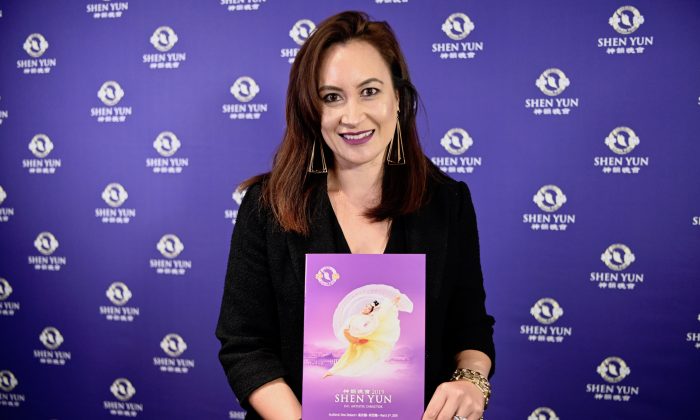 AUCKLAND, New Zealand—Nadene Lomu is a fan of Chinese culture, so seeing Shen Yun Performing Arts at the Aotea Centre, ASB Theatre, was deeply meaningful for her.

Coming out from the matinee performance, Lomu said she had been captivated.

“I have seen the many beautiful pictures and things that [Shen Yun] created for today, and it was a very captivating experience. So, the colors, and the synchronization, and the performance of all of the performers, it really was amazing to see.”

Lomu is the wife of New Zealand’s all-time great rugby legend, Jonah Lomu.  Jonah was New Zealand’s youngest All Black player when he started playing at 19 years of age, and by the end of his career he had become a global star.

Lomu said that the performance had inspired her. She feels an affinity with the Chinese culture as her great grandmother was Chinese and she feels that it is very special.

“I felt very privileged to learn more about the Chinese culture and to learn some of the stories that are very special to the Chinese heritage.”

“I think it doesn’t matter what culture or what heritage we come from, I think it’s good that we’re opened and enlightened by things that really mean a lot to different people,” Lomu said.

Formed in New York in 2006, Shen Yun Performing Arts is the world’s premier classical Chinese dance and music company. Its mission is to revive the authentic 5,000-year-old Chinese culture which has been all but destroyed during the 70 years of Chinese Communist Party rule.

The belief in living virtuous lives, observing principles such as righteousness, benevolence, justice, and loyalty were all part of traditional Chinese culture.

Lomu said a number of performances went straight to her heart.

“One of the ones that I do really liked was the  fairies in the clouds. Fairies in the clouds felt really special to me because my husband Jonah Lomu passed [away]not so many years ago. So there’s a lot of things and the heavens that are very close to me now,” Lomu said.

For Lomu, the dances were memorable.

“I liked the [dance] ‘Porcelain in the Balance,’ and the balance of that one was really nice. It was beautiful watching the vases and how they were able to move and it was just so graceful,” she said.

She appreciated the time and effort that it would have been required to bring this dance to fruition.

In this piece, the dancers balance large porcelain vases as they glide across the stage, a practice that existed in China for thousands of years.

Lomu could not single out one particular performance in Shen Yun as they “all did so well.”

Lomu said she would recommend Shen Yun Performing Arts to everybody.

“And I’ll definitely come back next year to see what other work has gone into it,” she said. “I really think they are delivering in such an emotional but a very special way as well.”

Also at the matinee performance was Stoyko Fakirov, a visiting professor at Auckland University from Sofia University, Bulgaria. It was the first time he had watched Shen Yun Performing Arts and he found it very interesting.

“I am very impressed by this innovative approach to combine the living actors with the pictures on the screen, and even I wonder how it is realized,” said Fakirov.

“Obviously, it is really very innovative, and very important approach because I read in the brochure that you got the patent in the United States for this technique, and it’s impressive, this, because it offers new opportunities to show the life on the moon, and coming to the earth,” said Fakirov.

Fakirov was referring to the dance “Visiting Changé at the Moon Palace,” a legend of mystical beings who visit the human world.

Many of the stories presented by Shen Yun touch upon the deep spirituality embedded within traditional Chinese culture. For thousands of years, teachings from Buddhism, Taoism, and Confucianism underpinned the way of life of Chinese people.

Fakirov admired the synchronicity of the dances.

“They work as one person,” he said adding that the costumes were very impressive and colorful. “It’s all so unbelievable.”

“I am mostly impressed by the total concept of the performance, its artistic dancers’ technique [and] this new, new approach.”

And Fakirov had a very special experience.

“And maybe I have also to mention that I am very proud that the conductor, Milen Nachev, is my countryman, and just now we met and I wanted to congratulate him.”

Shen Yun Performing Arts is to be recommended, said Fakirov. “It is unique in many respects, it’s a unique performance, and it deserves to be seen.”

Accompanying Fakirov was his wife, Olia Essina who is a company director.

Essina was inspired by Shen Yun’s performance, being particularly touched by the stories that were portrayed by the dancers.

She could feel spirituality in the harmony of the dances.

“I really loved it,” she said. “Colors, yes, but spirituality, I felt it. It is very touching.”

With reporting by NTD Television and Diane Rowe.