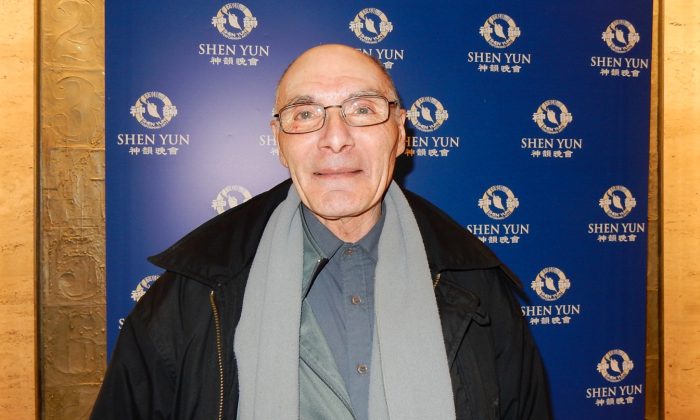 Mr. Peter Riso attends Shen Yun at Lincoln Center on Jan. 16, 2016; he seen Shen Yun five times and will be back next year. (Weiyong Zhu/Epoch Times)

NEW YORK—There was something very calm about Peter Riso as he answered a few questions about his experience watching Shen Yun perform. Perhaps his serenity is due to the fact that he practices meditation regularly.

Perhaps it is due to the fact that he found the performance relaxing, and has experienced Shen Yun performances previously. He has seen Shen Yun five times, both Shen Yun Performing Arts, the classical dance and music company, and Shen Yun Symphony Orchestra, which has toured on its own.

Or perhaps his state of mind is due to the deep and hopeful meaning he sees in Shen Yun’s performance.

For millennia the Chinese have believed that their culture was passed down to them from the gods. Shen Yun aims to revitalize the principles and beliefs of that ancient culture through music and dance.

Mr. Riso, a retired sales representative in the food industry, enjoyed Shen Yun simply on the level of entertainment. He found the dancers’ ability amazing.

He also enjoyed the orchestra and the digitally animated backdrops that seem to bring characters from the heavens to the stage. He found this wonderful—the timing, the precision, and the accuracy of the movements on stage. He was reminded of his own school days in musical theater and the amount of work theater required. This made him appreciate all the more the performance he saw tonight.

Subconsciously we are part of this, but we don’t realize it.
— Peter Riso

Mr. Riso also saw something deeper: “Subconsciously we are part of this, but we don’t realize it.”

In listening to soprano Haolan Geng and seeing the projected lyrics behind her, he believed the song explains that “God is coming to renew the earth, and we who are here are going to be part of this new generation, if you will.” We will be rebuilding heaven on earth, he said.

Mr. Riso knows others may not be ready to understand the show this way. He recommended that everyone come and enjoy Shen Yun with an open mind, without bias, and simply with a clear head: “Just come to see a performance. The rest will work within you when you are sleeping at home.”