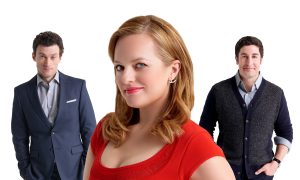 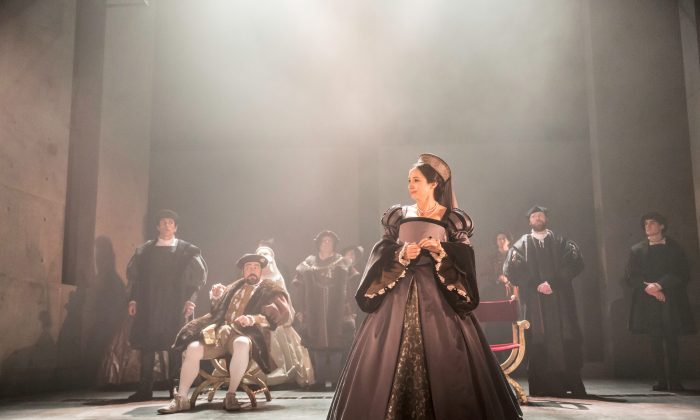 NEW YORK—One has a choice of two versions of “Wolf Hall,” including the six-part TV version on public television. But of interest here is the two-part theatrical version now showing on Broadway at the Winter Garden Theater.

This choice has been adapted by Mike Poulton from Hilary Mantel’s best-selling books and has been brought here via the Royal Shakespeare Company of Great Britain.

Directed by Jeremy Herrin, the two parts, “Wolf Hall” and “Bring Up the Bodies,” are dark, intense, and thrilling.

King Henry has a penchant for being violently attracted to women. He rids himself of these when a new filly takes his fancy. In this case, it is Anne Boleyn who is drawing Henry away from Katherine of Aragon (Lucy Briers), his wife of 18 years.

The third dominant figure is Thomas Cromwell, who, although of low birth, has risen over the years to become a lawyer and ultimately the king’s adviser.

Of immediate import is the fact that Henry is choosing to believe that Katherine was never his legal wife. This is simply an excuse for the fact that she has never presented him with a son to carry on the Tudor lineage. Thus Henry wants the pope in Rome to annul the marriage.

The overall physical darkness of the production lends to its impact.
But the situation is hopeless. The pope in Rome will not budge.

Because the willful Anne Boleyn will not take no for an answer, Wolsey’s failure in the matter will have painful consequences for him.

The canny Cromwell shrewdly maneuvers political happenings in such a way that he personally is not damaged.

Actor Ben Miles’s approach is interesting in that he is generally low key, but one can sense his intellectual wheels working, always staying just out of personal danger.

Anne Boleyn, however, perhaps too confident of her ability to charm the king, becomes overly ruthless and eventually careless enough to wear out her welcome. Although she has promised King Henry a son, she gives birth only to a daughter. Apparently, several miscarriages would have produced sons.

The overall physical darkness of the production lends to its impact. The stark set by Christopher Oram has a large, simple crucifix on the back wall that is surrounded by floor-to-ceiling cement-like slabs. These are bathed by rich, low light by lighting designers Paule Constable (Part I) and David Plater (Part II) and add to the powerful dramatic effect.

Costumes, also by Oram, are lush and lovely.

Throughout the plays, Henry’s almost petulant childishness rules the very lives of so many. Many must go against their own integrity in order to save their lives. Thus the lives of many are doomed to disaster simply to satisfy the sexual whims of King Henry.

In fact, Henry’s willfulness brought about the beginning of the English Reformation and slackened the hold of Roman Catholicism throughout much of Europe.

It is quite a history lesson.