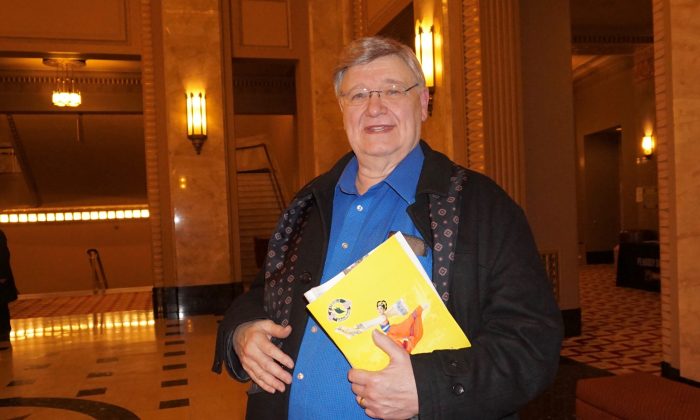 Retired Professor Peter Bukalski could not pick out any one dancer as the best in Shen Yun's company. "I think they all were perfect dancers," he said. (Nancy Ma/Epoch Times)

ST. LOUIS—Retired theater professor Peter Bukalski had a good deal to say about Shen Yun Performing Arts’ production at the Peabody Opera House, and all of it was positive.

“The most compelling thing about the performance is its absolute perfection …, and the excitement that it generates. So many things are done in a very exciting way,” he said on Feb. 12, after the performance.

The excitement Mr. Bukalski felt he attributed partly to how the whole program constantly changed.

Some of the dances are folk or ethnic dancers. Some rely on classical Chinese dance, capable of depicting drama. He commented on traditional stories but also very modern ones, and some were romantic and others more dramatic.

“There are solos, and there are individuals that do something unique by themselves, but most of it is, you know, groups of people and also this constant changing of the roles and the people, where there were groups of three or four or five, and it’s constantly changing, yet it changes so fast you don’t even notice how it’s done, so I think that’s a great achievement,” he  said about the choreography.

In addition, the costumes also changed for each dance, constantly giving the audience something new to see.

Lots of details, and the details are all spectacular.
— Peter Bukalski

“What can you say? It’s all very colorful, very beautiful. And, of course, because of the nature of the production there’s lots of jewels and shiny sequins and things that reflect the light and that shine. … Lots of details, and the details are all spectacular. … They add vibrancy to the visuals when you’re watching,” he explained. “And now it’s one thing to see things and another thing to see all these sparkles at the same time.”

And then the difficulty of dance itself added excitement, especially when the dancers use props, such as their sleeves or handkerchiefs.

“The big sleeves, the spinning of the cloth, I mean, all of this is very hard stuff to do,” he said, and explained that at Southern Illinois University–Edwardsville where he taught, a Chinese dancer once demonstrated how to dance with long sleeves: “She showed us how it’s done, and it was very, very hard, … but you see [Shen Yun dancers] all doing it very perfectly and very quickly. … Like all theater, it masks something that’s very difficult. It makes it look very easy, very beautiful, but it calls for tremendous discipline on the part of the performers, and I come away with great admiration for that,” he said.

In addition to the excitement was what he called a very polished performance, so polished as to reach perfection.

“I know enough about dance to know that it’s very hard for a line of dancers to all have exactly the same hand position and arm position. I know this is very difficult, and yet, they’re perfect. They’re perfect, absolutely perfect in every respect.”

He didn’t neglect the orchestra. Mr. Bukalski had played oboe himself and so was keen to observe the musicians, who he called wonderful.

The oboist had a reedier sound than most players, and aggressive playing style—”very present” rather than quiet as they often are, he said, adding that a quiet style wouldn’t work for this music. “So I think he was great—perfect. … and this is not easy music, this much I know.”

He considered the compositions ranging from lovely and romantic to aggressive and angry, complementing each particular story.

Of the soloist on the erhu, a two-string Chinese violin, he moved away from analysis and expressed that he was touched.

“It was sort of sad and it made me reflect a lot, just listening to it. It was very beautiful. But it causes you to reflect on your life a little bit, because of the nature of the music,” which he would have to call spiritual.

As with the rest of the performance, shaped so as to draw the audience in, “The pieces of music were very, very involving.”