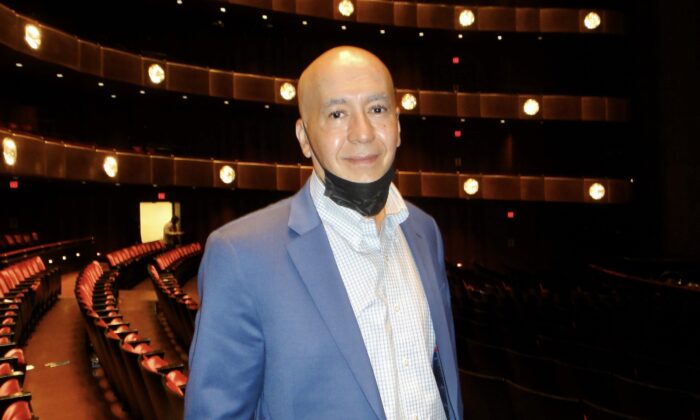 NEW YORK—Shen Yun Performing Arts, the classical Chinese dance and music phenomenon based in New York, travels over 150 cities each year, putting on its showcase of “China before communism.”

But even for a globetrotting performing arts tour like Shen Yun, home is still the sweetest. New York City’s Lincoln Center is where Shen Yun made its debut in 2006—and at the March 20 matinee, theater directors gave the performance glowing praise.

Harry Haourari, the Lincoln Center’s director of operations, saw the performance with his 17-year-old daughter. Mr. Haourari hails from Morocco and found it very enjoyable to learn about Chinese culture in this way.

“I like the production, the choreography. The culture that I had to learn about was absolutely incredible!” he said. “I think it’s gorgeous! It’s beautiful. I give it a 10!”

One of Shen Yun‘s hallmarks is its live orchestra, which harmoniously blends Western and Eastern musical instruments.

“I really love the live orchestra, especially that moment when they introduced the conductor and everybody else. There’s nothing like music with a live orchestra,” he said. “I believe music is healing—if you take it deep in your heart and you listen, it’s really healing.”

Antonio Omana, Lincoln Center’s director of food service, has been with the theater complex for about 36 years. He brought four relatives to see Shen Yun yesterday and another 10 today.

“They were so excited and they said they have never seen [such] accuracy [as] in this beautiful show,” Mr. Omana said.

Speaking of Shen Yun‘s gifts and merchandise, Omana said, “I’ve been your biggest fan and I buy every single year about the newest thing that you have in the market—I am collecting my Shen Yun. And I know one day, it’s going to be worth it. I have every single pen, I have pendants … I already ordered online the book today.”

“I’m going to frame each single thing by the years I bought,” he said, expressing his excitement for Shen Yun and its message of hope, goodness, and healing for the world.