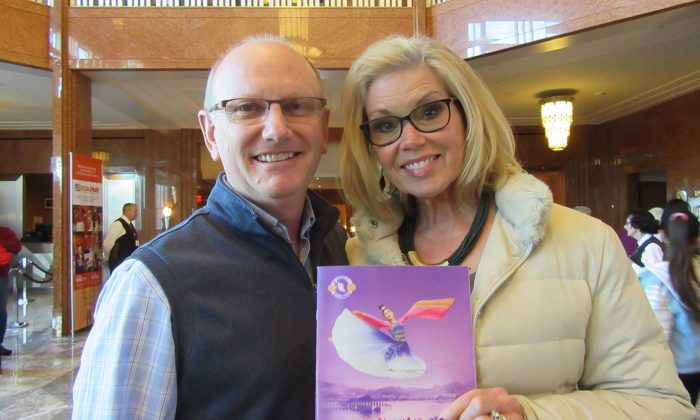 LAS VEGAS—David Jenner, national account vice president at Tri-State, took his wife LeAnna, a singer, to the matinee performance of Shen Yun Performing Arts at the Smith Center for the Performing Arts on March 9.

“It was amazing, absolutely amazing. I was just blown away. It was far more that I even expected,” said Mr. Jenner. “Just the beauty, the performance, the precision of their dancing, it was impeccable.”

New York-based Shen Yun is the world’s top Chinese dance and music company, and it aims to use the performing arts to revive the 5,000 years of traditional Chinese culture, which was once almost lost.

It was the Jenners’s first time being introduced to the rich artistry of China, with classical Chinese dance, traditional Chinese instruments included in a full orchestra, vibrant costumes, bilingual emcees, and stunning background scenes of China on an interactive digital backdrop that has its own patented design.

As a singer, Mrs. Jenner used to perform professionally in a show in Las Vegas, and she greatly appreciated that Shen Yun included vocal soloists in the program.

“She was beautiful,” she said, referring to the soprano. “Very clear and very well-trained. Loved it.”

Mrs. Jenner especially enjoyed the last dance piece of the performance, which she said had a special theme that also resonated throughout the entire program.

Her husband could also sense the deep spiritual underpinnings of traditional Chinese culture and the effort to revive this tradition.

“I think the message is very strong, loud, and clear. Hopefully everyone is paying attention and feeling it, and it will promote change in people that need to change,” he said. “We need to as a human race be kinder, more patient, more loving to everyone.”

Mr. and Mrs. Jenner had a few words of praise and encouragement for the Shen Yun performers.

“Thank you first of all for all of your hard work, your training, your devotion and dedication towards refining the art that you have. It’s beautiful and please continue to keep it up,” said Mr. Jenner.

“Take good care of yourselves. Keep your bodies healthy and strong so you can dance for many, many years. You are all absolutely adorable, and funny too, the boys are particularly cute in the comedy sketches, and the messages were communicated so well through the dance,” said Mrs. Jenner.

The couple said they would come back and see Shen Yun again, especially since it’s an all-new production every year.

“The world needs performances like these,” said Mrs. Jenner.

‘It just puts you in such a wonderful mood’

“It’s beautiful, very beautiful costumes, the dancing is wonderful,” said Sypniewski. “It just puts you in such a wonderful mood, seeing all the dancing and choreography. The colors are beautiful, love it.”

Walters said the performance “takes you on a wonderful journey” and praised the Shen Yun dancers.

“You can see the absolute strength, yet the softness and fluidity of everything that they feel through their movements, through the expressions. It’s wonderful,” she said.

Sypniewski said the whole experience made him want to learn more about both traditional Chinese culture and other cultures. He learned during the performance that Shen Yun is not allowed to perform in China, and he was shocked.

Walters was also disappointed it was banned in China, and said such a performance is a beautiful and wonderful way to share the Chinese culture. She has practiced martial arts and said she saw some movements that were similar to martial arts’ forms, which caught her eye.

The couple also addressed the religious and spiritual persecution still happening in China today, which was portrayed in a story-based dance about modern China.

“It’s beautiful. It was beautiful being able to overcome such persecution,” said Sypniewski.

“It’s devastating and heartbreaking that someone would be punished to practice something that they believe. I think we are called to bring to each other just the knowledge that we all have, the divine within us. It still makes me feel like that good will conquer,” Walters said.

With reporting by Jana Li and Sarah Le.