‘The World Is Better Off Because of Shen Yun,’ Korean Art Association Director Says 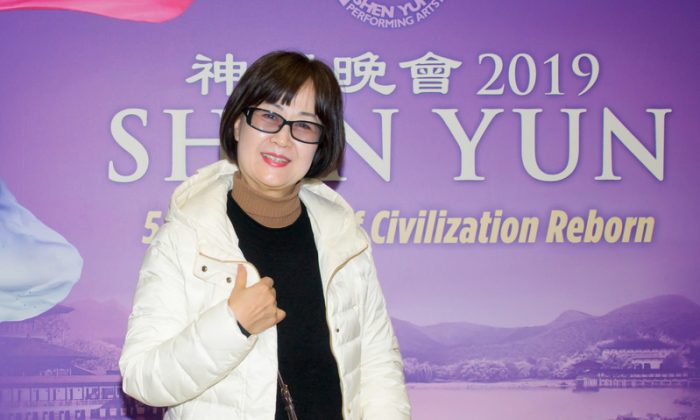 GANGNEUNG, South Korea—“Our world has become better off because of Shen Yun,” said Namgung Song, director of Wonju Branch of the Korean Society for Music Education, after Song saw the performance presented by Shen Yun Performing Arts World Company at Gangneung Arts Center, along with her daughter, on March 24, 2019.

Seeing Shen Yun for the first time, Namgung Song spoke highly of New York-based Shen Yun for its perfect portrayal of the magnificence of celestial world.

Through the universal language of music and dance, Shen Yun weaves a wondrous tapestry of heavenly realms, ancient legends, and modern heroic tales, taking the audience on a journey through 5,000 years of Chinese culture, according to Shen Yun’s official website.

“With live music accompaniment, this is indeed an outstanding performance,” Song said. “The seamless combination of traditional musical instruments and modern symphony orchestra made the music amazingly good and touching … I also heard of the sound of the erhu [in the music].”

Namgung Song very much enjoyed the animated digital backdrops that can make the audience have a miraculous feeling of transcending the time and space.

“The ancient Chinese architecture [in the backdrops] is spectacular and awesome,” Song said. “The synchronization of the backdrop showing the celestial world and the performance on the stage is seamless.”

Overwhelmed by the majestic scene of the piece “The World Divinely Restored,” a special feeling came to Song’s mind.

“Our world has become better off because of Shen Yun,” Song said. “Shen Yun elevates the human morality and teaches people the truth in life. It’s really great!”

“Shen Yun attaches much importance to tradition. If people ignored traditions, modernity would not be possible. Therefore, this performance is truly meaningful,” he explained. “For modern people, Shen Yun is a great teaching.”

“I saw the Shen Yun performance along with my daughter. For her, it is a very precious opportunity.”

Seeing the piece titled “Goodness in the Face of Evil,” a story depicting the great deed of the Falun Gong practitioners who returned good for evil while they were persecuted in China,  Song was deeply moved. “Because of the Chinese Communist regime’s ideology, the beautiful traditional art is sabotaged,” he noted. “It is truly lamentable.”

“They (Shen Yun performers) have a tremendous responsibility. I wish them good health, and hope that they can step up efforts to spread the beautiful culture to the world as a whole.”

“I hope that traditional culture can be revived gradually, and the ​​Communism can be denounced, so that people around the world can see the beautiful Shen Yun show together.”

Amazed by Shen Yun’s historical connotations, Namgung Song wanted to recommend Shen Yun to those who have an interest in furthering their understanding of Chinese culture. “Shen Yun is a magnificent art, as its storylines are related to traditional [culture].”

With reporting by Kim Gook-Hwan and Billy Shyu.