Returning to Carnegie Hall for 2017 tour 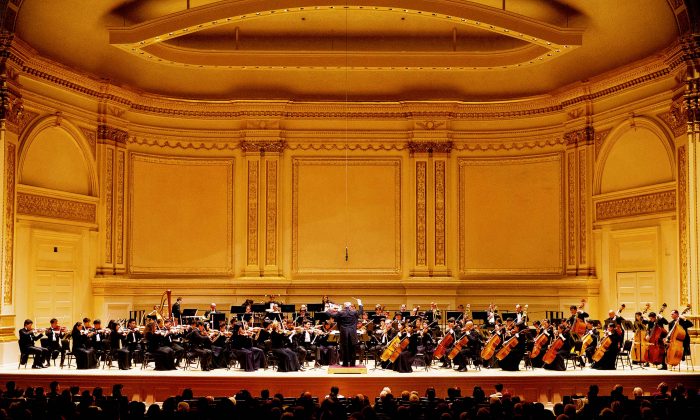 NEW YORK—Heaven may be just a concept for some or a remote reality for others, but that insurmountable separation between heaven and earth may be bridged, on occasion, through the arts. Inspired by myths, legends, and China’s 5,000 years of civilization, Shen Yun Symphony Orchestra presents a vivid storytelling experience, exuding a cinematic quality that transports the audience to a panoply of destinations, both cultural and spiritual.

Shen Yun Symphony Orchestra is, by all accounts, the No. 1 orchestra in the world combining Eastern and Western cultural traditions.

For those who have seen the phenomenally successful dance productions of Shen Yun Performing Arts on its annual world tours, listening to the company’s orchestra in concert gives the opportunity to enjoy the music in a whole new way. Without dancers on the stage, the music seems to magically conjure a different set of dancers, one arising from the imagination of the audience. Formed of your own mental images, memories, and inspired ideas, these dancers spring upon the open air full of vigor, creating a masterwork of imagination. To put it another way, as the music flourishes, so do you.

Shen Yun Symphony Orchestra is the most successful orchestra in the world to harness the precision and power of Western orchestration and animate it with the authentic instruments and rich melodies of ancient China. Before the 19th century, China was the most advanced civilization on earth for thousands of years. This brilliant cultural reawakening is highlighted by the fact that Shen Yun performs mostly original compositions and punctuates them with celebrated Western classical works. A great new frontier in music is opening up, and Shen Yun is leading the way.

This year’s program begins with “Descent from Heaven: A Renewal.” Although this year’s program notes have not yet been revealed, a similar piece in last year’s program is described thusly: “The sound of the gong opens up the scene of divinities answering a call from the Creator to descend to Earth. Descending lines signal multitudes of beings coming down from the heavens to the world, incarnating into the grand imperial court of China’s Han Dynasty. The delicate melodies of the ancient Chinese string instruments contrast with strong percussive rhythms and the brass section.”

Other highlights of this year’s program include new pieces, such as “The Great Khan,” which tells the story of Kublai Khan, the great Mongol leader and grandson of Genghis Khan who founded China’s Yuan Dynasty in the 13th century; “Tibetan Drums,” replete with the sound of horns conveying the majesty of the Himalayan peaks; and “A Passage in Time,” based on a romantic fairy tale about a young man’s sojourn through a Taoist abode.

Tales recorded in Chinese history tell of wanderers chancing upon hidden worlds. Some have been described as secret abodes of Taoist immortals living in a parallel dimension. The audience feels like one of those wanderers while listening to Shen Yun. The time passes swiftly as if floating upon the harmonious enchantment. When the conductor and orchestra bow at the end of the performance, you wish it would never end.

After Shen Yun’s performance at Carnegie Hall, the orchestra will continue its tour across North America and Asia.