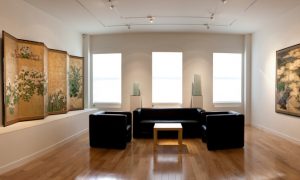 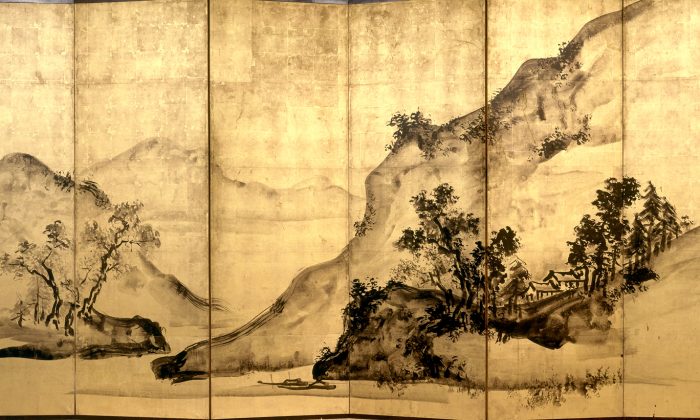 The Tradition of ‘Picturing Place in Japan’

Picture Japan’s rich history and tradition as Princeton University Art Museum invites you to explore Japan’s heritage through the exhibition “Picturing Place in Japan,” which is on display until Feb., 24. The exhibition is a chance “to engage with one of the most central traditions within the history of Japanese art,” says James Steward, director of Princeton University Art Museum, on the TownTopics website.

Through book illustrations, woodblock prints, paintings, and photographs, nearly 40 artworks from the 16th century to the 21st century explore the different ways  that place, imagined or actual, is found in Japanese art.

The exhibition is divided into three main categories that the Japanese visual arts traditionally use to depict pictures of place: “Imagined Places,” “Famous Places” (meisho 名所), and “Sacred Places” (reijō 霊場). And the exhibition ends with photographs in remembrance of the Great East Japan Earthquake and Tsunami of 2011.

Curator of the exhibit, Andrew M. Watsky, a professor of Japanese art and archaeology at Princeton, describes the moments when these pictures of place are in front of him: “As is always the case when I’ve curated exhibitions, it was a wonderful surprise to experience the physical presence of the works, large and small. For example, the enormous screens in the first gallery have a great impact on me every time I enter and see them, with their all-enveloping breadth and fluid and lively brushwork. Over and over, I feel the thrill of seeing the actual art,” he said in an email.

Japanese art was sometimes created directly from life but most of the artwork came from artists’ imaginations. These imaginings could be inspired by other art or could be a complete work of fantasy, but they were usually influenced by Chinese art, which the Japanese held in high esteem.

The Japanese saw China as a source of cultural legitimacy, said exhibition co-curator Caitlin Karyadi, a doctoral candidate at Princeton University, on the Princeton Art Museum website. As they were unable to visit China, the “Japanese artists internalized centuries of painting practice and created their own interpretations of an imagined China.”

The Japanese painting tradition of “sansui” (mountains and water), now commonly translated as “landscape,” borrows its motifs and brush idioms from the Chinese “shan shui” painting precedent. Japanese sansui were not limited to just mountains and water but included trees, rocks, flowers, buildings, and people.

A painting by Tachihara Kyosho (1785-1840) shows the rare scene of a Japanese artist at work: The painter is painting indoors from his memory; perhaps he’s painting a place he once visited or, Karyadi said, it’s more likely he is working from a painting he has studied, or a picture he has painted before.

The brushes were made from animal hair, which made them strong yet flexible enough to show the spirited motions of the hand and the mind of the artist. Each stroke of the ink on the paper or silk gives an impression of the artist; the ink acted as an adjuvant to not only convey the final picture, but also the personality of the painter.

Different examples of brushwork are on show. In the painting “Beautiful Scenes of the Four Seasons at a Glance” by Kano Eitoku Tatsunobo (1814–1892), jagged rock formations and the exquisite details of the rock faces are reminiscent of ancient Chinese scholarly painting. Kano adhered to the traditions handed down through his centuries-old family workshop, which indeed based their painting practices on ancient Chinese academic art. The result is a dynamic flurry of brushwork undercut by a calm serenity.

A stillness can also be seen in Tani Buncho’s pair of screens, although the brushwork contrasts Kano’s. Tani (1763-1841) applied spirited and individualistic brushstrokes. The effect of these dynamic movements were enhanced by the fact that the ink was unable to penetrate the metallic, gold-leafed paper. Although these brushstrokes imply movement, there are no signs of activity in the painting: Boats appear motionless. And there’s a warm glow of golden light, yet there is not even a hint of a season in this place.

Yet seasons definitely had a place in Japanese art, with paintings often conveying all seasons in one scene, such as in Kano’s mountain in “Beautiful Scenes of Four Seasons at a Glance.”

Literature and Motifs in Japanese Art

Tradition is at the center of Japanese art. The motifs act as a hidden cultural language for the viewer to understand more, and perhaps aid his or her contemplation.

Traditionally then, literature was a highly regarded form of art in Japan and as such many of the pictures of place contain prose or poetry. Poetry was in fact the highest form of art in Japan, and often these themes of place would appear first in poems, and then later they would appear in the visual arts. The words complement the pictorial scene and allow further interpretations to be made.

A poem within the painting “The Shrine of Tenjin” by Reigen Eto (1721–1785) tells us of the pine trees and the flowering plum that the deified poet Tenjin, Sugawara no Michizane (845–903), was so fond of. Legend speaks of Sugawara’s love for a plum tree. It was said that Sugawara’s flowering plum could fly.

Before he moved out of his home in Kyoto, Sugawara wrote a loving poem to the tree:

If an east wind blows,
send me your fragrance by it,
blossoms of plum:
Do not forget the springtime
because your master is gone.

The tree was so upset at his master’s leaving that it flew across a vast landscape to the distant outpost of Dazaifu just to be with Tenjin, and that’s why it’s now called “Tobi-ume” (The Flying Plum). Although, some say the tree was re-planted at Dazaifu Tenman-gu (one of his main shrines), we can imagine through Reigen’s swift brushstrokes and rather abstract rendering of the plum blossom, the act of the blossom in flight.

Another example of the marriage of art and poetry on display, “The Three Views of Japan” by Tanomura Chokunyu (1814–1907) shows three famous places: Ama no Hashidate, Itsukushima Shrine, and Matsushima. The artwork is inscribed with two sets of poems, one on the scroll itself by Tanomura and another on the painting’s mountings by Tomioka Tessai (1837–1924). All poems add commentary to the places in the picture.

Literature was not only used as a way to add insights and aid interpretation of the paintings, the script could also be used to actually create the forms in the painting. “Mount Fuji of Poems” by Yamaguchi Shido (1765–1842) creates the contours of the mountain with vertical lines of poetry: The mountain is literally made of literature and each poetic line informs us of the revered mountain, as well as making up the mountain’s form.

Motifs in Japanese art act as another guide to the meaning of pictures of a place, such as the famed Mount Fuji that symbolizes good fortune or the pine tree that represents perseverance.

The most auspicious symbols of the Japanese New Year dream, or Hatsuyume, are Mount Fuji, a hawk, and eggplant. If these motifs appear in your dreams on the first night of the new year, which in Japan is traditionally Jan.1, it signals a good year ahead. Hakuin Ekaku (1686–1768) shows all three motifs in his large hanging scroll, inked by strong, simple brushstrokes that fill the vast space.

In ancient Japan, the main reason that people traveled was to go on a pilgrimage to a temple or a holy site. Pilgrims are portrayed in the painting “Nachi Pilgrimage Mandala,” which gives us a birds-eye view of the vibrant daily activities at one of Japan’s most revered temples, inside and outside of the temple walls. Pilgrims would gather around this painting as temple storytellers, aided by the painting, would tell the sacred stories of the shrine. We can almost imagine the words the storytellers would speak as we see the pictures within the painting, read from right to left, just as when reading Japanese script.

Gazing in quiet contemplation was another theme of paintings. In an image by Kameda Bosai (1752-1826), a man in sheer peace gazes at the peaks of mountains, in the book “Mountains of Heart.” And in a print of a popular temple in Edo (Tokyo) by Katsushika Hokusai (1760-1849), men and women gaze at Mount Fuji.

In “Picturing Place in Japan,” curator Watsky’s humble hope for us is that “we can see how Japanese artists celebrated the world around them–mountains, water, actual places in Japan, imagined places in China–and, with this awareness, we might be even more attuned to the world around us, wherever we are.”