The Spirit of China Alive in Shen Yun 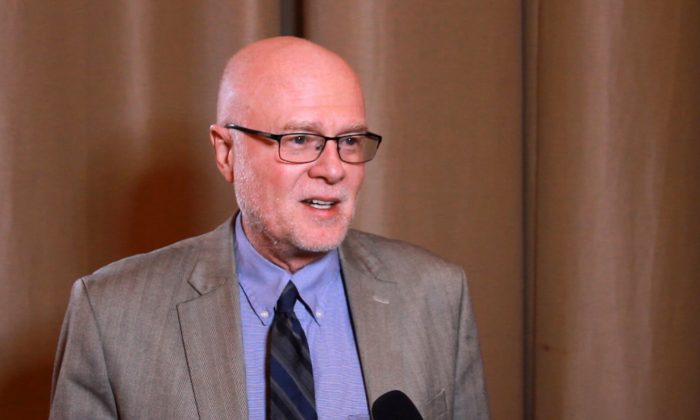 Bill Dennis had been searching for traditional Chinese culture and found it in Shen Yun, in Washington D.C. on Feb. 19, 2016. (Courtesy of NTD Television)

WASHINGTON—Bill Dennis, CEO of Metro Collaborative and Practice Success that leads networking in the healthcare industry, had been interested in the spirituality of China.

There is 5,000 years of it, but the spiritual culture is so little known to the West, he realized.

“It really conveyed to me a spirit I was not familiar with and aware of, so I am very grateful,” Mr. Dennis said of the performance. “It is not the China I have grown up with. So I am studying as much as I can, this culture, but this has been very inspiring, inspiring me to study more.”

China, once known as the Divine Land, placed great importance on spirituality. Morality, the idea that good is rewarded and evil punished, and respect for the heavens that bestowed its divine culture were important ideas for 5,000 years.

It was not until communism took power in 1949 that China was cut off from its illustrious past. The atheistic regime strove to uproot the traditional culture, burning books and razing temples. Thus, a performance like Shen Yun cannot be seen in China today, as the emcees said.

New York-based Shen Yun was formed just a decade ago, and it is the mission of the artists to revive the authentic culture and bring it to the world.

What Mr. Dennis saw was a message “of inclusiveness, love, tremendous commitment to truth and integrity and self expression.”

“I think it is tremendous, because we are not aware of this. I am 65 years old, I have been to the best universities and I have never been exposed to this. So its wonderful,” Mr. Dennis said.

This spiritual side of China was also new for architect Michael Stenberg, who was also in the audience Friday night.

He said, with a laugh, that what he saw was so beautiful he could really understand why people from the West had been trying to get into ancient China. The beauty came through in the color, the coordination, the music, and the hard work he could tell all of the performers had put in.

Being a history buff, Mr. Stenberg said he had read about the Chinese dynasties. “But this is the closest I’ve been to traditional Chinese culture,” he said. There were stories of eternity and the spiritual side of China.

Like many theatergoers, he felt Shen Yun showed a bright future for China.

“China, under communism, doesn’t work. It’s based on false ideas and ideology, and it will eventually fall. Any kind of collectivism does not work. You have to have the individual as well,” he said. There needs to be individualism and community and spirit, he said.

“I’m just so glad that [Shen Yun is] bringing that part of Chinese culture back, because it needs to be revived. China needs to rise again, and I’m just very happy to come and happy to be here,” he said.