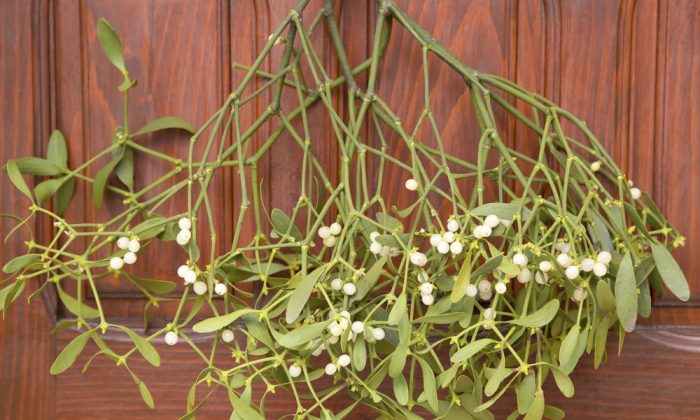 The Secret Life of Christmas Plants

Medicinal uses for holly, mistletoe, and poinsettia
By Conan Milner

Holly, mistletoe, and poinsettia are best known as Christmas decor, but they have an even longer history as healing herbs.

There are hundreds of varieties of holly, and all share the genus Ilex meaning “evergreen oak.” American holly has the iconic look: red berries and barbed green leaves.

To the ancient cultures of Western Europe, holly signified the death and rebirth cycle of winter. To the druids, holly was most holy, because it was favored by Hel, the Norse goddess of the underworld.

Holly is synonymous with dreams and magic. Pythagoras suggested that holly branches held the power to control animals, and claimed that the flowers could freeze water. Pliny the Elder, the renowned naturalist of ancient Rome, said holly could protect houses from lightning, and men from witchcraft.

In medicine, the leaf is the part used most often. Roasted holly leaf tea has been used to treat winter illness, such as fever and cough, as well as and digestive complaints.

Several hollies contain caffeine; Yaupon holly and Yerba mate are considerably caffeinated varieties. The roasted leaves make a black tea that has served as both an invigorating beverage, and a ceremonial purification drink for tribes native to the land that is now the southeastern United States.

Holly leaf contains other stimulants, such as theobromine—a bitter alkaloid often associated with chocolate—as well as vitamins A, C, and high levels of antioxidants. A study from Texas A&M suggests that holly leaf has anti-inflammatory properties and may protect against colon cancer.

Holly berries are also used as medicine, usually dried, and only with great caution. Although birds eat the highly caffeinated berries, they cause vomiting in humans, and can be fatal in high doses. Nicholas Culpepper, an English herbalist of the 1600s, considered holly berry a cure for colic, and recommended its use to “purge the body of gross and clammy phlegm.”

Holly flowers offer medicine for the mind. Flower essences are used to treat emotional imbalance, and holly deals with jealousy and suspicion. It is for people who have lost trust in themselves and others, and perceive deceit when there is none.

Mistletoe is a parasitic plant that is mostly found tangled in the branches of apple trees. Like holly, it has long been associated with winter, and was a magic plant to the Druids, who preferred the rare specimen that lived off of oak trees.

European mistletoe (Viscum album) is the variety usually used in medicine today, but American and Chinese mistletoe have been used as well. The oblong leaf is the only medicinal part.

The white berries of the European variety have a poisonous reputation, but many dispute this claim. The red berries of the predominantly decorative American variety, however, are undisputedly toxic.

Mistletoe has long served as a symbol of peace, and its sedating effect has made it a good remedy for nervous system disorders, such as anxiety, panic attacks, and epilepsy. It is widely used in Europe as a tea for lowering high blood pressure.

Mistletoe has also been associated with fertility. It is a uterine stimulate, so it is forbidden during pregnancy. However, it can be used during labor to facilitate contractions for an easier birth.

Mistletoe’s modern claim to fame is as a cancer remedy. Early 20th century philosopher Rudolf Steiner first suggested the idea, noting that mistletoe behaves like a cancer to the host tree. Mistletoe has since become the most popular unconventional cancer treatment in Western Europe.

Traditional applications involve a tea or tincture taken orally, but for modern cancer treatment, a fermented mistletoe extract is administered via injection. It is used not only to shrink tumors, but to counteract the symptoms associated with chemotherapy and radiation.

Mistletoe injections are used in Switzerland, the UK, Germany, and the Netherlands, but are not approved in the United States. Research on the effectiveness of mistletoe on different types of cancer shows promise, but it still lacks the rigorous clinical trials necessary for regulatory endorsement.

This native Mexican weed is a relative late comer to the Christmas ornamentals scene. While it does naturally bloom in the dark part of the year (much like Christmas cactus), poinsettia didn’t have any winter holiday relevance until the mid-1800s.

Poinsettia is not poisonous, despite widespread belief to the contrary. Eating the mild tasting leaves is said to produce nausea and vomiting, but it takes a lot to reach this threshold. Researchers at Ohio State University found that a 50 pound child would have to consume more than 500 poinsettia leaves to have symptoms.

Poinsettia is primarily a topical remedy. It has been used in Mexican folk medicine to treat warts and other skin problems. It has also been used for toothache and other types of pain.

Tear a poinsettia leaf and you’ll find a sticky white sap, which may irritate the skin of those with latex allergies. This signature points to another remedy: helping milk to flow for nursing mothers.

The latest medicinal application for poinsettia is as a flower essence. This preparation is used for those who have trouble expressing emotions.