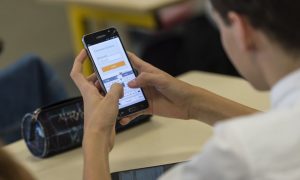 French Government to Ban Cell Phone Use in Schools
0 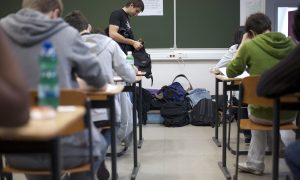 Dialing in on Cell Phone Bans in High School
0 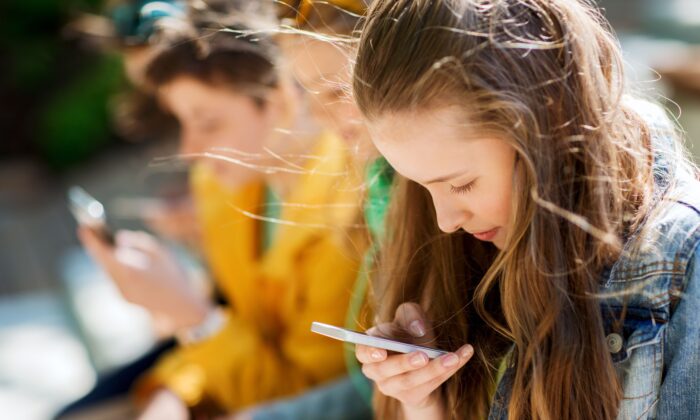 While our bodies can hold many postures for a prolonged time, young people are assuming the "tech neck" position for far too many hours each day. (Syda Productions/Shutterstock)
Mind & Body

The Scourge of Tech Neck, and Some Tips to Correct It

Phones and laptops have become our constant companions. They provide convenience, communication, and a constant source of entertainment. They’re primarily designed to engage our minds. But they may also contribute to the degeneration of our bodies.

“Tech neck” is an unofficial term to describe a very common issue. Anyone who gets engrossed in a screen can fall victim to this position: the shoulders hunch, and the neck assumes a vulture-like curve.

A few moments in this posture isn’t such a big deal—the dynamic human body can take numerous positions to perform a variety of tasks without consequence—but spending too much time in a tech-neck stance takes toll.

In our device-driven culture, examples of tech neck are easy to spot. And now that so many of us are working from home, avoiding public get togethers, and attending meetings via Zoom, doctors are seeing more problems related to this posture than ever before. One is orthopedic surgeon Dr. Brian A. Cole.

It might seem hard to imagine that a slouchy posture can really have that much of an impact, but Cole sees real evidence of damage from it in his practice. He says that spine deterioration usually starts when we’re about 30 years old—50 percent of 30-year-olds have bulging discs—but patients are starting to show signs of spine deterioration at much younger ages.

“I’ve had a few teens come to see me recently, and when they got an MRI, lo and behold, they had herniations,” Cole said. “We may be seeing a change in the physiology because of texting.”

There are lots of reasons to adopt good posture: You breathe better, your organs have more space, you look better, and some research says it can even impact our mood and overall health.

But when it comes to poor posture as a source of pain and a driver of spine degeneration, Cole says the problem behind tech neck is that our bodies aren’t designed to hold our head at this precarious angle for extended periods of time.

An adult human head weighs about 10 to 12 pounds, but our body carries this weight best when it’s directly over our shoulders. When upright, the neck is just holding that 10 to 12 pounds. But for every 10 degrees of angulation our neck falls, the weight of our head increases by 10 pounds. This is due to the increased force of the head’s weight on the neck. To understand, think of how a 10 pound weight can lift a much heavier weight if it is at the long end of a teeter totter or lever. When the head tilts, it is leveraging its 10 to 12 pounds against the neck.

“So when you’re in the classic texting position, your neck is flexed about 60 degrees. Therefore your head now weighs about 60 pounds,” Cole said. “If the musculature is used to 10 pounds with your head in neutral position, and you throw 60 pounds on it, that vector of force is substantial.”

Build and Support Your Body Mechanics

Before your posture becomes a literal pain in the neck, learn some tips to correct it.

“Get that neck back. Do a chin tuck. Bring those shoulders back. If someone took a picture of you texting from the side you would see a dramatic change in your alignment,” Cole said.

Another key point to good posture is strength. Even if you make repeated efforts to sit up straight, years of prolonged sitting and slouching can weaken the muscles that are supposed to keep you upright, pulling you into a default humpback position.

Luckily, we can build these muscles back. You can find lots of exercises to help strengthen your structure, but Cole says to concentrate on the core. When your core is strong and engaged, it can better support everything else that rests on top of it.

Another key part to keep fit is your shoulders.

“When it comes to your neck, it’s really about your upper traps—your shoulders. Simply taking a 10 pound weight [in each hand] and rolling your shoulders around does a great deal for neck pain, and you’ll see a substantial improvement in your ability to keep your head up,” Cole said. “It takes an effort, but it pays off dividends.”

In addition to being more mindful of posture and developing a stronger frame, you can also support your body mechanics by changing your work environment. Raise your computer or phone closer to eye level so your head isn’t forced to pitch forward. You can also try modifying your seat.

“Just by giving yourself some lumbar support you can actually correct your neck indirectly,” Cole said.

But even the most ergonomically beneficial chair and desk still is not as helpful as sitting less. While we often sit for comfort, being stuck in this position for hours on end can be hard on your spine. If possible, try a standing desk, or make a habit of getting up every half hour or so and walking around—an activity that, unlike sitting, actually improves the circulation of the spinal disks.

“The reality is that you put more stress on your low back sitting than anything else you do,” Cole said. “This is why stand up desks are very intriguing. They offer a lot of benefit for aligning your body better.”

Standing lets your spine take the load of the body properly with the least additional weight due to odd leveraged angles. Just like tech neck, slouching and other poor postures hurt the spine. Standing up, meanwhile, increases circulation and the tone of the musculature, said Cole.

“It makes a big difference.”