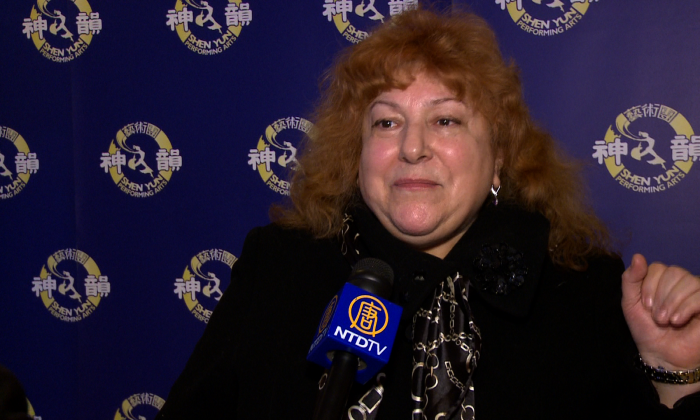 The Musical Splendor of Shen Yun

TORONTO—Acclaimed musicians came to see Shen Yun Performing Arts’ final show at Sony Centre on Sunday, Jan. 25, and shared their thoughts on what they experienced.

Internationally renowned Belarusian-Canadian soprano Galina Lukomsky was delighted with what she saw.

“I like it very much,” she said, adding that she was grateful to her friends for having brought her to see the performance.

Shen Yun is the world’s premier classical Chinese dance and music company, having received both critical and audience acclaim for its superior artistry and its mission to revive 5,000 years of culture believed to have been a gift from the divine.

Ms. Lukomsky was particularly impressed with the performance by erhu virtouso Mei Xuan who performed “All For Today,” accompanied on the piano by Yi-Chin Lin.

“It was something amazing,” said Ms. Lukomsky.

Ms. Lukomsky also very much enjoyed Shen Yun’s orchestra that combines Eastern and Western musical traditions. “It [has] roots from everywhere,” she said. “It’s interesting to hear it. It’s beautiful.”

On Sunday afternoon he brought his mother Madeline to see the performance.

Mr. Milligan was taken by the music as well as the instrumental soloists.

“It was beautiful,” he said noting that it left him feeling uplifted.

‘It Took me to a Different Place’

Piano teacher Elaine Ferguson brought her twins to see Shen Yun along with her friends.

“For me, it was a different type of sound, not one that I’m normally used to hearing–it took me to a different place.

“It was more a wondrous feeling for me and more of a curious feeling that it brought out. It drew me in and wanted me to listen more carefully and to see what different sounds the instrument produced,” she said.

“They did such a wonderful job of telling the story (through the music),” she said.

“Sometimes it (the music) was very exciting and you could hear—sometimes you could hear the bass in the storm and in the fighting. You could relate to what was going on there—it brought a whole array of emotions.”

Shen Yun features performance of classical Chinese dance to depict myths, legends, and contemporary tales, all drawn from the 5,000 years of history.

Ms. Ferguson said it was the first time her children had a chance to listen to a tenor and soprano and she was happy they had the opportunity.

“It was a real treat to be able to hear the tenor and the soprano and the [erhu], so it was really wonderful,” she said,

Tenor Tian Ge’s voice particularly stood out to her. “It vibrated, it filled the room and we were able to hear exactly what he was about to say. It was very, very clear—it was beautiful,” she said.

She could also identify with the spirituality in “Your Long-Awaited Song” performed by soprano Yu Ming. In the song, the soprano sings:

“Life isn’t a contest for status and wealth/You and I alike came from heaven above.”

Ms. Ferguson said she felt this was a “spiritual message about being connected and all being one,” adding that she believes in “a peaceful and kind world.”

“We do affect one another, so it’s very important what we do,” she said.

The piano teacher said she was leaving Shen Yun with a wonderful experience shared with her family and friends and with a different way of looking at things.

“I feel uplifted,” she said. “You feel hope and you feel uplifted, and it’s just very happy. It leaves you with a wonderful feeling. It was a great story and it was told wonderfully. I very appreciated all the hard work and effort that everybody put into doing that,” she said.