‘The most beautiful show that I’ve ever seen,’ Says Actress of Shen Yun 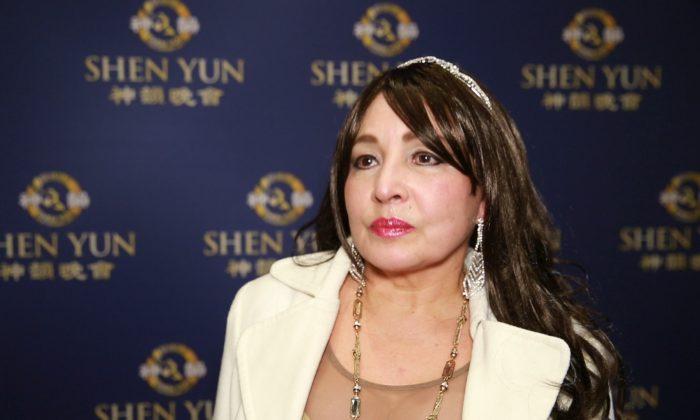 Attending the performance was Francis Espinosa, who works as an actress.

Shen Yun is a non-profit organization based out of upstate New York. It was established in 2006 in order to bring 5,000 years of Chinese civilization to life through the performing arts. Having already performed in front of millions of people across some 20 countries and 100 cities, Shen Yun is widely recognized as an international phenomenon.

Ms. Espinosa’s was especially captivated by the performance’s singers, and in her opinion, there were “no words to describe” the beauty of their voices.

As Shen Yun website states, “The primary trait that distinguishes the singers of Shen Yun is their use of bel canto technique to sing Chinese text. This means that the singer must, while continuing to meet the challenges inherent in bel canto technique, retain proper Chinese pronunciation and diction. Today, these singers’ ability to do this is unparalleled.”

Ms. Espinsoa said she thoroughly enjoyed her experience, and described Shen Yun’s performance as “a gift from the heavens.”

She is going to invite her fellow actors and friends to come watch Shen Yun for themselves.

“I think this is really the most beautiful show that I’ve ever seen in my life,” she added.

Also among those in attendance was Nico Maetsu, a film studies professor, who came to the show with his daughter and parents.

Mr. Maetsu particularly enjoyed the show’s use of everyday props, describing their incorporation into the dances as an “innovative” addition.

According to the website, “In recent years, Shen Yun dances have featured a range of unexpected props, each telling a story. Fluttering fans bloom like the petals of a delicate flower. Umbrellas twirl in refreshing drizzle.”

“Stage props strengthen a dancer’s ability to convey intricate emotions. When used to maximum effect, they add to the dances an extra lively spark, forming stunning images of beauty and splendor onstage,” the website explains.