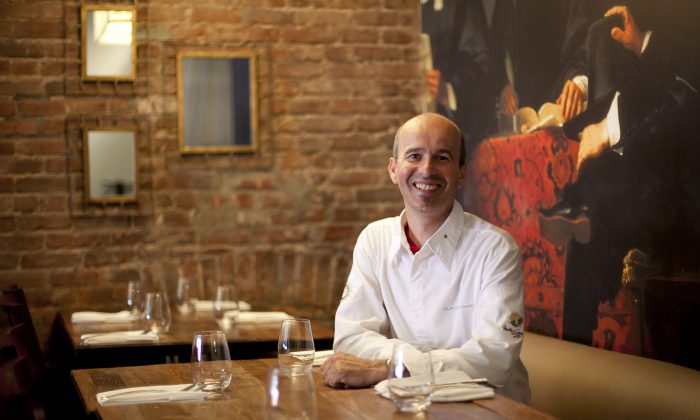 The Makings of a French Master Chef

NEW YORK—At the tender age of 5, when most children are learning to tie their shoes, Claude Godard sized up the family stove, which stood almost as tall as himself, and made his first crepe—topped the traditional French way, with a sprinkling of sugar.

“I was a little scared of the heat, of the stove,” he recalled.

Godard, now 48, and owner and chef at Madison Bistro and Jeanne & Gaston, is now completely self-assured at the stove, of course. A tall man with a relaxed demeanor and ready smile, he has the calm confidence of a highly accomplished chef.

True to the French approach to food, Godard’s cooking embraces utter respect for the ingredients, something he picked up alongside his chef father, Gaston Godard, in his hometown of Joigny, in Burgundy, which is well known for prestigious wines with musical names that dance on the tongue: Chablis, Côte-de-Nuits, Pouilly-sur-Loire.

Days going to the farmers’ market stand out vividly in Godard’s mind. “In France the markets are beautiful, especially in small cities, you know. You have all the producers who are bringing no more than two or three kinds of lettuces. Those lettuces are so rare, so different, so fresh, organically grown. Even if they serve two different kinds of lettuce on their table, it doesn’t look like much, but you feel attracted because you feel like you want to have it, to serve it to your customer.”

Burgundy is a land of forests and rivers, and where the cuisine is closely bound to the bounty of the land. Godard used to love picking mushrooms—black trumpet, porcini, girolle, chanterelle—”You walk, walk, you don’t find anything, and then find a big, big patch of mushrooms and you become very excited. Did you ever go pick mushrooms? Did you ever notice of the garden when it’s just rained, and you have the woods just in front. It smells like mushrooms you know? When you bite into a mushroom, when it’s very fresh, you smell that, non?”

These kinds of memories, around food, around family, can be a source of inspiration, he said.

Godard now works and lives in New York City, far from his homeland, and that is due in some ways to the insistence of New Yorkers.

After culinary school in Paris, apprenticeships at Michelin-starred restaurants, and working in South Africa, Godard returned to Burgundy to the family business. He also did some work for chef and author Anne Willan, who asked for his help on her cookbooks and in teaching classes at her renowned Ecole de Cuisine La Varenne.

There, people came from all over the world, and Godard met many Americans, especially New Yorkers. “They were telling me, ‘why don’t you come to New York to open a restaurant?’ Different people kept repeating that all the time.” So, Godard made a couple of exploratory trips to the city and found himself hooked.

He loved the mix of cultures. “I found the city extremely amazing,” he said. “The people, the town. I got attracted by the vibe there. It was so energetic, so foodie-oriented. The people were very interested in food.”

The vibe felt different from Paris, where it was mainly tourists who were interested in food, not the French themselves. “You know, French people, they think they know everything about food. Then, when they go to a restaurant, it’s more to go to feed themselves—except when they go to three-star, two-star Michelin. It’s very expensive, and they don’t go very often.”

When Madison Bistro opened about 15 years ago, Godard found the eating habits quite different from what he was used to in France. “At that time, [New Yorkers] were not eating like the French ate, like kidneys, sweetbreads, brain, tongue. Things like that were not very welcome. Now it has become extremely popular.”

Still, he stuck with what he wanted to do, keeping to his approach to food, in terms of quality, and in the end, was rewarded with success.

Madison Bistro is a small place, with a cozy and elegant feel all at once, with dark wood and candlelight. It’s lively, too, but the background noise is low—making it perfect for conversation. The artworks on the wall, the monoprints and linoleum carvings, were created by his wife, artist Véronique Coutant Godard.

On a recent visit, I got to sample his dishes, all wonderfully balanced in flavor and texture.

“You know, the best the way I learned, is to work with the product, to try to respect the product as much as possible and just bring a little touch to make the product better, by adding a little bit of cooking, a bit of sauce, or jus, or something—not to hide the product behind weird flavors or things like that,” Godard said.

“If we don’t have any products, we cannot cook, you know? The respect of the product needs to be very strong and that’s what keeps my orientation all the time. Freshness, quality, and also beauty of the product.”

Godard’s favorite dish currently is the Chicken Parfait Royal, Green Peas Coulis & Enoki Mushroom Salad. The parfait was silky and creamy, something of the essence of chicken, complemented by the taste of fresh, sweet peas, and topped with golden enoki mushrooms. As sophisticated as this little dish looked, it took me right back to my childhood (and those basics, chicken, peas, mushrooms).

When Godard speaks of memories inspiring food creations, he said it also works the other way, with food triggering memories.

“I love the color of the green peas, it’s the most natural green that you can find, you know? We added those enoki mushrooms on top which are nice because you can feel the forest when you bite.”

The Sweet & Sour Foie Gras is a superb marriage in flavor and texture. The foie gras is seared and placed atop a thin layer of mango, which in turn sits on of a piece of baked turnip, accompanied by a sauce of honey and vinegar.

We had the Sole Fillet Sundried Tomato, Zucchini Bayaldi and Anchoiade—the sweet, mild taste of the sole really comes through, and is accented beautifully—not overwhelmed—by the savory tapenade and sundried tomatoes.

“I wanted to make something a little more southeastern of France, more Mediterranean. Because the fish is very white and beautiful—it looks kinds of pure—I didn’t want to cover it with sauce. I wanted to have a bit of tapenade to bring the taste and saltness of the black olives with the vegetables. This is a very summer dish for me—very light, refreshing, even though it’s warm.”

My favorite entree was the Sea Scallop Risotto and Herb Coulis. The scallops are superbly seared, the risotto rich but not overly so, aided by the clear flavor of herbs.

For desserts, we had Pear Crumble, Blueberry Tarte, and a Vacherin, but made with a twist: inside a glass, not frozen, and with blackcurrant and cream. Like the other dishes, the desserts let the ingredients shine through in a delicious, refreshing way.

Even after sampling all these dishes, none of it felt heavy. And that’s because part of the beauty of French cuisine is about assembling different ingredients to keep the plate well balanced, said Godard. “The balance of your dish, the balance of your menu, it’s very important.”

The French way of cooking was indeed heavier in the old days. “Paul Bocuse was saying, good food is lots of butter. OK, it’s true, it’s very good. It is very good, lots of butter, lots of cream. But we have to look after our customers.” And so while butter and cream are still part of the foundation of the cooking, it’s not as dominant as it used to be.

“Most of the time, we finish putting the flour into the sauce to thicken it. We almost don’t do that anymore. We work more on the reduction, the extraction of the taste.”

Although the menu is seasonal, some dishes so popular they are available year-round: the steak-frite (“it’s fantastic because it’s served with a traditional black peppercorn sauce. We use a little bit of cream and you can feel the sauce is rich and with a lot of flavor from the pepper,” said Godard), and the short ribs bourguignon, which is mouth-wateringly tender, after marinating in Pinot Noir for 24 hours and then slowly cooked for six hours.

Cooking for the Family

At home, Godard in turn tries to turn his own memories of food into memories for his children, aged 19 and 12.

“I try to put flavors and things that I learned through my childhood, from my grandmother, from my father,” he said. “When they eat, I like to give them a story about it. They love to hear it.”

For example, he makes a flan au lait (a shell tart filled with milk, eggs, and sugar, “almost a sweet quiche, but no ham, no cheese”). His grandmother would make the dish for him after picking up fresh milk from the farm next door. “I used to love that.”

Besides Madison Bistro, Godard also runs Jeanne & Gaston, a more contemporary French bistro on the edge of the West Village. The garden out back is hugely popular, especially in the evenings—the trees are aglow with lights and the sound of the water running in the fountain evokes serenity. “You don’t hear anything from the street, it’s so peaceful. You feel you’re not in New York anymore.”

He is thinking about a third restaurant and is looking for investors.

Chefs, he said, are builders. “We like to build recipes, we like to build restaurants, decorate, we want the customers to be happy, in a nice environment. It’s part of the chef profile.” He is not sure what it will be yet. “Maybe a rotisserie—because I like to go into a restaurant and see the chicken roasting in front of you and be able to carve it in front of the customer.”