The ‘Heavenly’ Shen Yun Symphony Orchestra Lives Up to Its Name 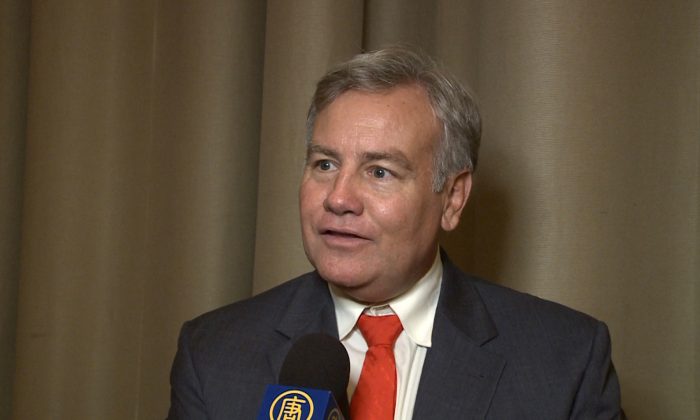 WASHINGTON—”It felt like you were in heaven,” said business owner David Wallace after attending a Shen Yun Symphony Orchestra concert at the John F. Kennedy Center for the Performing Arts on Oct. 11.

It is a common reaction from audience members who have just heard the unique orchestra, which combines Chinese and Western instruments in its arrangements. Sunday evening, the performance received a standing ovation and two encores.

“It was wonderful, it was just inspiring, and I deeply, deeply enjoyed it,” Mr. Wallace continued.

The orchestra, which is made up of members from Shen Yun Performing Arts’ several touring companies, continues in its mission to revive traditional Chinese culture, which is said to be divinely inspired. Founded in New York nine years ago, the artists named the company “Shen Yun,” which translates to “the beauty of divine beings dancing.”

The music expresses, according to the program, what all of Shen Yun’s art tries to achieve: “an experience so profoundly beautiful and joyful that evokes a sense of the heavens.”

Mr. Wallace had studied classical music in college and remains an aficionado, so he enjoyed the unique instrumentation and the original compositions performed.

This brings a big smile to my face, when I have the chance to listen to such wonderful music.
— David Wallace

“It was just absolutely beautiful,” Mr. Wallace said, recalling the harmony, the intensity and power of the music, and the crescendos that gave him a sense of being uplifted. “This brings a big smile to my face, when I have the chance to listen to such wonderful music.”

There were classical favorites like Tchaikovsky’s “Marche Solennelle” along with original pieces like “The Power of Compassion,” and even bel canto solo vocalists in Sunday evening’s concert.

The concert opened with the sounding of a gong, in “Following the Creator to Renew All Things,” composed by Jing Xian. The piece reflects the ancient belief that Chinese civilization was divinely inspired, and tells the story of the Creator descending to Earth to create the Middle Kingdom, starting a glorious era. Then a piece highlighting the Chinese lute, or pipa, follows, bringing the audience as far back as the Zhou Dynasty, south of the Yangtze River.

When Noel Panebianco heard the pieces, it evoked images of such old civilizations.

“It was quite powerful,” she said of the orchestra. Ms. Panebianco has a great interest in the culture, having studied Eurasian history, and was excited to learn the orchestra would be touring in Philadelphia, where she grew up and still has many family and friends.

“They absolutely have to go!” said Ms. Panebianco, who attended the performance with her husband. “This was a phenomenal experience and we’re so grateful to have been able to catch this while we were in the city this weekend.”

For Anthony Yankowski, seeing the orchestra made him want to spread the news about Shen Yun’s upcoming 2016 tour, where the orchestra accompanies classical Chinese dance.

“I will purchase the tickets now if I can,” Mr. Yankowski said with a laugh. He had enjoyed hearing the Chinese instruments and authentic Chinese sounds, appreciated the clarity of it, and wanted more. “I look forward to it very much.”