The Healing Power of Shen Yun 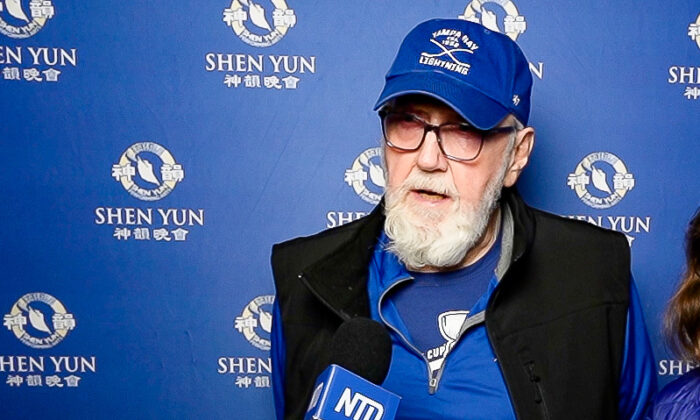 SYRACUSE, N.Y.—Being immersed in beauty and joy can melt away one’s pain even if it’s only temporary. Walter Dixon, a retired business owner came to see Shen Yun Performing Arts with his family and while he walked to his seat with his walking stick, he walked out after the performance without it.

“I usually use walking sticks. I’m not using them right this minute. I’m standing without them. I have Parkinson’s disease. I had trouble getting in here and after the show, I walked right out of there—I don’t know what happened,” Mr. Dixon shared.

The experience of New York-based Shen Yun not only let Mr. Dixon forget his physical pain but also allowed him to feel calmer and relaxed.

The whole thing was healing really, made me feel calm.
— Walter Dixon

“The whole thing was healing really, made me feel calm. I’m very religious, I was supposed to go to church you know at 5:30 today, I miss church today to do this—It feels good to me,” he said.

China’s 5000 years of civilization have left behind splendid myths and legendary heroes. China has also been immersed in deep spiritual beliefs until the Chinese Communist Party took over.

“The religious part of it touched me, that China has been such a place. I know the real struggle to keep communism away from things. It was unbelievable. It talked about atheism and atheism doesn’t help the world and having a higher power of some sort does, and that was very obvious in the show,” Mr. Dixon said.

China culture is divinely inspired and Shen Yun talks about how people on Earth were originally from the heavens and that we have the opportunity to return.

“I think we come from heaven and we’re going to go back,” Mr. Dixon shared.

“This is unbelievable. It’s so professional. It’s top-notch,” he said. “They were there on the screen flying. I thought it was fabulous. I’ve never seen it before. I would come back again for sure.”