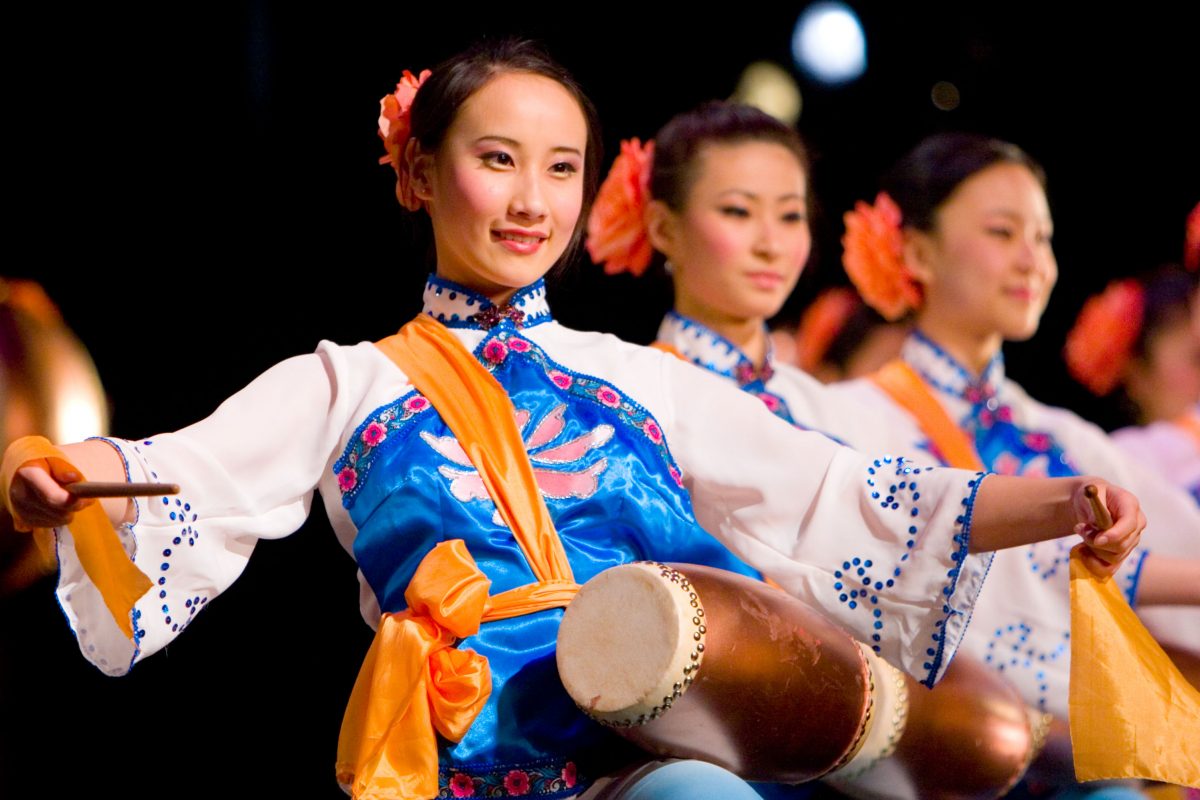 Dancers play the waist drum in a Shen Yun performance. Shen Yun Performing Arts was established with a mission to revive the true traditional culture of China that has a history of 5,000 years. Much of this culture has been destroyed over the past 60-plus years under communist rule, especially during campaigns such as the Cultural Revolution. (Photo courtesy of Shen Yun Performing Arts)
Shen Yun

The Chinese Regime’s War on Dance

Those who survived the Chinese Cultural Revolution will not forget its horrors. It was a time when religion was labeled “superstition,” intellectuals were branded “class enemies,” and the underlying principles of China’s 5,000 years of culture were destroyed.

Chinese dance, with its fluid movements and foundation in traditional beliefs, would soon be swept into a wave that would tear away its roots and establish it as a tool of the revolution.

“Since the beginning of its rule, the Chinese Communist Party (CCP) has consistently claimed that the performing arts ‘should assist in the process of educating the masses,'” writes Ellen Gerdes in an article in Asian Theatre Journal, citing leading China specialist Colin Mackerras.

On May 16, 1966, the first leader of the CCP, Chairman Mao Zedong, began the Cultural Revolution. The movement of killing “class enemies” and the destruction of traditional culture would last until Mao’s death on Sept. 9, 1976. It is estimated that the Cultural Revolution caused the deaths of up to 8 million people in just 10 years, according to the Global Service Center for Quitting the CCP.

Shortly after the Cultural Revolution began, Mao appointed his third wife, Jiang Qing, as the deputy director of the Central Cultural Revolution Group, and she would gain control over the CCP’s destruction and re-establishment of culture and performing arts.

When she still lived in China, San Francisco-based dance teacher Lily Cai was among those whose traditional dance practice was stopped when Mao’s wife took charge. Her story was outlined in a report from the Music Center of Los Angeles County.

Mao’s wife, referred to as “Madame Mao,” allowed only five “revolutionary stories to be danced,” and Cai was a principal dancer of one of these at the Shanghai Opera House. Mao’s wife, “controlled the style, themes and expression of art so that it was geared toward a revolutionary and military intent,” states the report.

“Lily Cai remembers that everyone on the street was fighting and students dropped out of school to promote the writings of Mao Tse-tung,” states the report. “At this time, all the people learned a Revolutionary Dance” that required “no technique.”

Ellen Gerdes explored yangge dance, a specific form of Chinese folk dance with origins in agricultural ceremonies. It is believed to originate from the Song Dynasty (959–1278 CE). She says yangge dance “is particularly linked to the CCP’s policies during both the party’s establishment and the Cultural Revolution.”

Yangge dance caught the CCP’s eye, as its foundation as a farming dance tied it closely to the emerging regime’s goal of rallying the lower class to revolt against the upper class.

“Because peasants throughout China practiced yangge as a collective dance … it was an important target for the CCP, which sought to unify the lower classes for one cause,” states Gerdes.

In order to establish a new culture based in communism and atheism—to this day the Chinese regime remains officially atheist—the CCP destroyed China’s traditional values and beliefs during the Cultural Revolution. The performing arts played an important role in this, and was “an important factor in the CCP’s victory,” according to Gerdes, referencing Mackerras.

“The leaders of the CCP co-opted the processional manner and the symbolism embedded in these movements in order to create a dance of ordinary people who followed leadership,” she wrote.

By 1943, the CCP was leveraging and promoting the use of folk song and dance. Its “New Yangge Movement” was also spread to areas still governed by the Kuomintang. “This yangge was not of traditional form, but rather a new form that developed in movement, theme, and popularity based on its utilization by the CCP,” Gerdes wrote.

It was dubbed “Yan’an yangge,” or “revolutionary yangge” and differed from the traditional dance form both in “theme and movement,” according to Gerdes, adding “[it] was created by the CCP as it altered old yangge to meet the cultural policy of the government.”

“The CCP altered initial themes of yangge,” states Gerdes, adding, “It was this alteration in theme of yangge that allowed the CCP to use yangge at mass meetings and political public demonstrations that presented the news of the countryside and spurred on agricultural reform.”

The CCP’s use and alteration of traditional dance served two purposes: to destroy the art’s cultural elements, and to re-establish it as a form to praise the party. Traditional stories were altered, while some were simply created in order to promote the regime’s various campaigns.

“The CCP actually employed yangge dance to promote the CCP and its policies and to encourage people to effect change en masse,” Gerdes wrote.

Despite the role it played in establishing the CCP’s new culture, even yangge dance was not spared from suppression during the Cultural Revolution, due to its roots as a traditional art.

“Even though yangge dance was a collective dance form that could be co-opted for group cooperation and political propaganda, Mao could not overlook its origins,” Gerdes wrote. “Therefore, during the Cultural Revolution, yangge dance waited in silence for an era of reform in performing arts policy.”

Yangge dance and other traditional Chinese art forms would not emerge again until October 6, 1976, when Hua Guofeng was appointed as the new head of the CCP, and the infamous “Gang of Four” was arrested.

The Gang of Four, among whom was Mao’s wife, was credited with the suppression of yangge dance, according to Gerdes.

The essence of yangge dance was lost. “Teacher Ma, a dance teacher at a cultural bureau in Beijing, explained to me that the yangge taught in dance conservatories, such as the Beijing Dance Academy, is highly codified,” Gerdes said.

She was told that the new yangge dance form is a combination of ballet movements learned from the Soviets, and other forms learned from dance schools established by the Chinese military.

Although many people in China are still trying to preserve yangge dance, “they are also preserving a dance form that is laden with Communist ideology,” Gerdes said.

The fate of yangge dance has been duplicated among all traditional forms of Chinese dance.

According to Taiwan’s Department of General Education, classical Chinese dance is a preservation of China’s traditions. It tells the stories and myths of its culture, it was used to celebrate days of importance to the Chinese people, and it was also used in drama and theater.

“In the Chinese culture, dance reflects the degree of sophistication that the Chinese people have achieved in the society,” states the report. “It carries our thoughts and traditions through thousands of years of history.”

It adds, “Chinese culture is based on the notion that a spiritual world exists in large part of our life. Dance keeps countries’ national pride alive. Therefore, one of the great ways to appreciate Chinese culture is through dance.”

Traditional dance became a target for elimination by the CCP because the art form was closely tied to the values of the Chinese people—values the regime sought to uproot in order to establish its own power.

According to a report from Taiwanese Nai-Ni Chen Dance Company, there are three important elements of Chinese art: “Jin (Concentration), Chi (Flow of Energy) and Shen (Spirit),” all of which can applied to traditional Chinese dance.

“These aesthetic values are distilled from the major philosophies (Taoism, Confucianism, and Buddhism), which constitute the cultural values of the Chinese civilization,” states the report.

These values were anathema to the CCP.

The motto during the Cultural Revolution was “Battle with heaven, fight with the earth, struggle with humans—therein lies endless joy.”

Traditional Chinese dance, on the other hand, was closely tied to the ancient Chinese values of harmony with heaven, earth, and man.

Although much of China’s traditional dance heritage was lost during the Cultural Revolution, a resurgence is taking place.

In 2006, a group of Chinese artists living in New York set out to revive the lost dance traditions. They formed Shen Yun Performing Arts and brought together some of the leading talents in Chinese dance, music, and choreography.

The non-profit organization has established itself as the world’s premier classical Chinese dance and music company, and has since grown to three full ensembles each with its own orchestra.

According to the company’s website: “At a time when the influence of Buddhism, Taoism, and Confucianism was strong in the Middle Kingdom (a name for China), art was a means of connecting with the higher universe. Artists cultivated virtue and engaged in study and meditation, because they believed that to create true art worthy of the heavens, there must first be inner beauty and purity. Today, Shen Yun’s artists follow in this noble tradition.”

Shen Yun has performed in some of the top theaters around the world, yet is banned from China, due to the influence of the Chinese Communist Party. The Chinese regime regularly attempts to stop shows, but has rarely succeeded.

The dance company had seven sold out performances at the Hong Kong Academy for Performing Arts’ Lyric Theater in January, yet the shows had to be canceled after Hong Kong authorities denied entry visas to several key staff members at the last minute.

Hong Kong audiences were disappointed. “We regret that the Hong Kong people are denied their right to see Shen Yun Performing Arts and understand that this incident constitutes a violation of Hong Kong people’s freedom,” states a Shen Yun press release issued after the cancellation.

A similar incident happened in Moldova, where theater managers, after receiving pressure from the local Chinese consulate, refused to let the production crew inside to set up for the shows. Chinese consulates have been known to send threatening letters to theaters that have signed on to host the show.

“The Chinese communist regime has been seeking to interfere with our performances for years by trying to pressure officials and theaters to cancel our shows,” states a press release from Shen Yun Performing Arts.

Joshua Philipp
Follow
Joshua Philipp is an award-winning investigative reporter with The Epoch Times and host of EpochTV's "Crossroads" program. He is a recognized expert on unrestricted warfare, asymmetrical hybrid warfare, subversion, and historical perspectives on today’s issues. His 10-plus years of research and investigations on the Chinese Communist Party, subversion, and related topics give him unique insight into the global threat and political landscape.
SHARE
Friends Read FreeCopyFacebookTweet
You May Also Like