The Audience at the Vienna Stadthalle Shares Insights 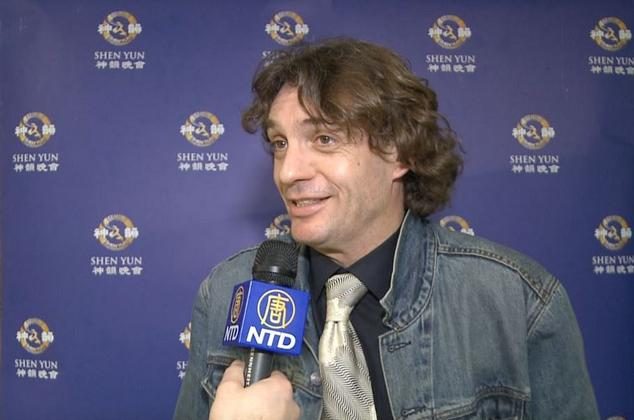 Mr. Philipp Devaux, a pianist and owner of a cabaret was deeply touched at Shen Yun Performing Arts in Vienna. (NTD Television)

VIENNA—Returning to Vienna, Shen Yun performers have graced Austria’s capital again with their presence. They were welcomed, as in prior years, by the Wiener Stadthalle, one of Vienna’s largest concert venues. Many in the audience had seen the show in prior years and looked forward to seeing the latest Shen Yun performance.

According to Shen Yun website, “Each season we produce an all-new show and tour with it around the globe, performing at the world’s top venues—Lincoln Center in New York, Kennedy Center in Washington, the London Coliseum; our Shen Yun Symphony Orchestra has played at Carnegie Hall and this year is touring other revered concert halls across the United States.”

Inspiration Takes Time to Come About

He said, “It was absolutely wonderful. All the colors were beautiful and the great traditions from China’s 5,000 year history were amazing.”

“I was deeply touched by Shen Yun’s performance. I am also an artist and I know I will be able to dream about the beauty of this show.”

“My dreams will take me from modern to ancient times. When watching Shen Yun, one has to immerse oneself and only this way can one understand and enjoy it.”

“The music is perfectly harmonized with the dance. One feels as if one is in China, not only because of what one sees on stage, but also because of what is shown on the backdrop.”

More specifically, China’s myths, legends, and history are brought to life on stage through story-dances and gain even greater importance because of the interactive backdrops.

Many of the Shen Yun audiences said that it is difficult to express one’s feeling immediately after the show. Mr. Devaux agrees, “I will feel more and more inspired over the coming days. My first impression was that I’m in China, but that is only a superficial understanding and my understanding will increase as the days go by.

Touched by the Compassion Shown by the Performers

Dr. Evelyn Senger, who has her own office, invited her team to see Shen Yun’s closing show. Included in the party was Ms. Savine Deto.

Dr. Senger was the first to comment on the performance, and said, “We truly liked the show. Before the show, we had no clue what to expect. However, we were pleasantly surprised to listen to the story about China. We also were surprised to hear that the performers didn’t live in China.”

Shen Yun formed in New York in 2006 with a mission to revive the traditional values and arts of ancient China, which have been destroyed during decades of communist rule.

Ms. Deto chimed in and said that the show stressed the divine, “Virtue is emphasized by gods and I really liked that this show emphasized that too. I was touched by the compassion exhibited by the performers.”

Agreeing with her, Dr. Evelyn added, “This shows expands the intellect, the horizon of the people in the audience, especially since the show is based on historical information.”

‘Virtue will always be part of the Chinese culture’

Shen Yun was not only attended by Vienna’s locals, but also by those that are spending some time in Vienna, including Mr. Vladyslav Thieriekhov, a journalist from the Ukraine.

Mr. Thieriekhov was impressed with the beauty of Shen Yun, “and also the value of heart work and compassion exhibited throughout the performance.”

What impressed him the most was that the performance “emphasized the decent side of humanity, such as courage and kindness.”

He is certain that “no matter what goes on in China, virtue will always be part of the Chinese culture, as well as what brings heaven, earth, and humans together.”

Reporting by Qin Huang, NTD Television and Heide B. Malhotra