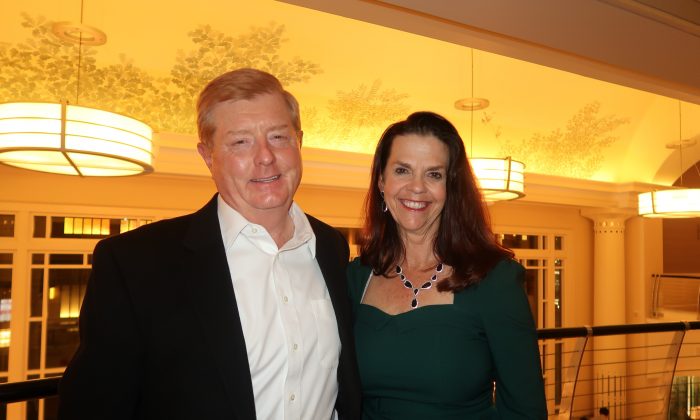 The president of Global Recruiters of Las Colinas, Tom Bath, and his wife, attended the Shen Yun Performing Arts at the Bass Performance Hall on Jan. 7, 2019, in Fort Worth, Texas. (Diane Gao/The Epoch Times)

FORT WORTH, Texas—Tom Bath, the president of Global Recruiters of Las Colinas, enjoyed watching Shen Yun Performing Arts with his wife at the Bass Performance Hall on Jan. 7, in Fort Worth, Texas.

“We enjoyed it very much,” said Bath.

“The pageantry, the colors, the athleticism, and the overall storyline were just fantastic.”

Bath was most impressed by the coordination and athleticism of the dancers.

Shen Yun dancers prepare for months in their New York headquarters for each season’s all-new program. They spend arduous hours practicing highly difficult maneuvers like the flips and tumbling required of the traditional Chinese art form, classical Chinese dance, in order to bring 5,000 years of Chinese civilization to the stage.

“I thought they did a wonderful job of portraying both the timeline and many aspects of the Chinese culture,” said Bath.

“My takeaway message is it’s a very enjoyable show. The dancers and the overall storylines were absolutely terrific.”

Shen Yun strives to bring nearly-lost authentic Chinese culture and its traditional values to audiences everywhere. Their mission is to protect and revive this lost culture.

“I think they are doing a terrific job,” said Bath.

“It’s pretty impressive that they’ve got so may troupes working simultaneously around the world.”

Shen Yun has six companies of 80 members each touring the world, and their 2019 tour which began in December has over 130 cities on its growing itinerary, including many new cities this year.

‘It was just magnificent’

Nick and Linda Reeder were also in attendance. Mr. Reeder is a Simulator Engineer with American Airlines and Mrs. Reeder is a lawyer with the U.S. government.

“I absolutely loved the show,” said Mrs. Reeder. “I’ve been wanting to come here for years, finally have the opportunity, got to sit right up front, and it was just magnificent.”

Mr. Reeder added, “It was beautiful.”

The duo was happy seeing the artistry of the performance.

Mr. Reeder agreed. “I loved the show all the way through from beginning to end.”

Being close to the stage, the couple could see the musicians in the orchestra pit. Shen Yun has a unique orchestra that combines classical western and Chinese instruments. The Shen Yun Symphony Orchestra also has its own standalone tours.

“It was just wonderful, and especially seeing the Chinese instruments play with other instruments,” said Mrs. Reeder. “What an experience.”

“I just think it’s horrible, it’s a waste.” said Mrs. Reeder. “I mean you need to know your history. So many people don’t. And the idea that history is being kept from people…it really breaks my heart.”

The CCP is the party responsible for eradicating the traditional culture in China, which Shen Yun is reviving. From their headquarters in New York, Shen Yun touring groups travel all over the world, but they cannot yet go to China, for risk of political persecution by the communist party. But Mrs. Reeder hinted that those in the free world can come to Shen Yun to learn an almost forgotten history.

“A lot of people just let history go by and not even try to learn it, and it’s [Shen Yun] just great,” she said, adding that people have always learned from the past and that it is wonderful to learn about different people and their histories.

“I think that’s just something that we don’t want to lose sight of, ever,” she said.

“Until you experience that you won’t know,” said Mr. Reeder. “I love it. I really do.”

With reporting by Diane Gao, Amy Hu, and Carrie Gilkison.