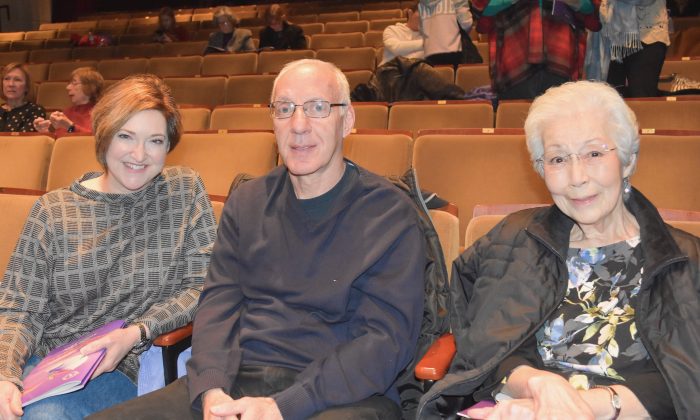 “You don’t learn about history in this way ever,” Helt said.

“It’s a great way to … travel back in time to a culture that’s quite unfamiliar to us.”

Helt, who had previously seen Shen Yun perform in Asia, brought her uncle and stepmother to enjoy the performance at the Eisemann Center in Richardson, Texas, on Jan. 3.

Shen Yun Performing Arts is the premier classical Chinese dance company. Founded in 2006, its mission is to revive 5,000 years of Chinese culture through music and dance. Each performance consists of roughly 20 dance or music soloist pieces, showcasing various elements of China’s history and culture.

Some of the performances involve stories from China’s ancient history told through classical Chinese dance. Classical Chinese dance is a complex art form developed over thousands of years. Along with a rigorous physical component, the dance style emphasizes the refinement of bodily, facial, and inner expression to communicate a deep and diverse range of emotions.

Helt, who owns Chiki Tea Store in Japan, a company specializing in green tea products, was impressed with how effective storytelling through dance was.

“It’s fascinating because we’re learning about the history of China in such a beautiful way and also a humorous way,” Helt said.

Humor is weaved into some of the stories through cheeky and light-hearted characters, slapstick, and amusing and unexpected plot developments.

The CEO also praised the skill of the performers.

“The talent of the dancers is beyond anything I’ve seen before,” she said.

Lack of Freedoms in China

Helt, who has previously lived in the cities of Shenzhen and Guangzhou in China, recalled the lack of freedom living under the Chinese Communist Party.

“To not have that freedom, it’s sad. Most of us can’t even imagine that in America,” she said.

Helt said some stories saddened her as it made her think of the reality faced by millions of people persecuted in China because of their belief.

Those stories depict the persecution of practitioners of spiritual practice Falun Gong, also known as Falun Dafa, in China today. The practice consists of meditation exercises and ancient teachings centered around the principles Truthfulness, Compassion, and Tolerance. After it was made public in 1992, Falun Gong gained widespread popularity in China, with about 70 million people practicing by 1999. Threatened by this popularity, the Chinese Communist Party (CCP) banned the practice in the same year and launched a sweeping crackdown against practitioners, who have been subject to prison, torture, or even death.

The CEO said she would help promote the performance because it provided a unique learning experience.

“So I really hope it spreads far and wide and we’ll do all we can to spread the word because it’s such a fantastic show,” Helt said.

She applauded the production’s efforts in bringing traditional Chinese culture to the forefront.

“I just wish the best for spreading the love and joy and history of China in this way,” Helt said.

“I think everybody should experience this just once in their life.”

Also in the audience on Jan. 3 was Chuck Eismann, the local philanthropist who made the theater the performance took place in possible.