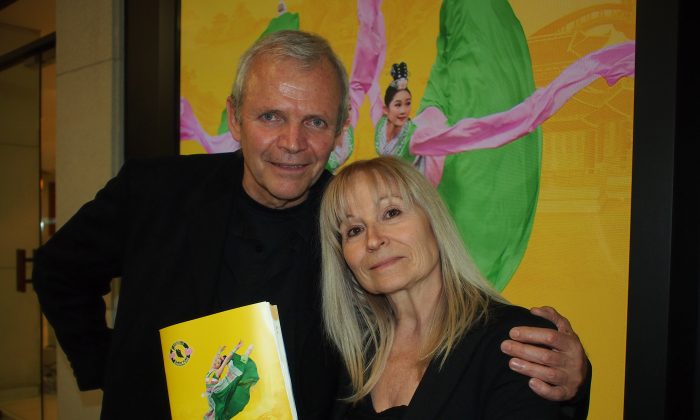 Richard Magnan had high praise for Shen Yun after seeing the show with his wife, Céline Godin, at Place des Arts on May 1, 2016. (Nathalie Dieul/Epoch Times)

MONTREAL, Canada—Richard Magnan had high praise for the performers and their love for and devotion to their craft after seeing Shen Yun Performing Arts at Place des Arts on the afternoon of May 1.

“[The performance] was done with so much devotion, so much love, so much precision that I told myself, if the people who built my house, who made my car, or who made my food or my clothes were as devoted to such perfection, my car would not break, my house would be perfect, I would be in good health,” said Mr. Magnan, a retired police officer.

He was speaking about Shen Yun’s performers of classical Chinese dance and music, but he took this perspective to a broader level.

“I think it applies to all areas of life, because if people who are in the police, firefighting, legal, and social services would work with the devotion, with the love these [performers] show, and with that aim of perfection, we would solve all problems,” he said.

New York-based Shen Yun is celebrating its 10th anniversary this year with the mission of reviving the true, traditional culture of China through the performing arts.

The company tours the world every year with an all-new program expressing the spiritual essence of the 5,000-year-old culture, which is “traditionally considered a divinely inspired civilization,” according to Shen Yun’s website.

The performers, who include the world’s leading classically trained dancers and musicians, take the audience on a journey through the ancient civilization using the universal language of dance and music.

Classical Chinese dance, with its incredible flips and spins along with its gentle elegance, is one of the most rigorous and expressive art forms and has played a key role in helping to preserve the ancient culture.

Mr. Magnan said he wished he had seen the show earlier in his life—much earlier—but that he is happy to have seen it now.

He also had a plan for becoming a better person—with some help from Shen Yun.

“When I want to be better, I’ll have a thought that, because it is like a photograph I have in my head, a small movie that I filmed, I will remember a part of the show and it will help me,” he said.

Mr. Magnan’s wife, Céline Godin, said she likes dance and also enjoyed the Shen Yun Orchestra very much. “I got up and I applauded them,” she said.

Among some 20 pieces showcasing myths and legends from ancient China as well as Chinese ethnic and folk dances, the Shen Yun production also included dance stories telling heroic tales from ancient history to the modern day.

As a former police officer, Mr. Magnan also commented on the portrayal of the persecution of practitioners of the Falun Gong traditional Chinese meditation discipline by the communist regime’s police officers.

Noting that the scenes were well guided and had a positive effect, he said, “We must talk about [this issue], we cannot avoid it.”

Mrs. Godin said it was hard to believe in this day and age that “[the practitioners] are not free there, free to practice Falun Dafa and to do the simple exercises.”