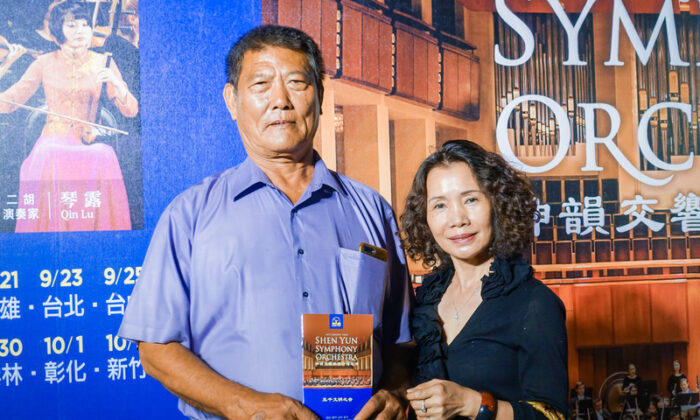 “I really cannot put into words. But I feel very great. After an hour an a half of Shen Yun music, I am in a better mood,” Wu said. “This is a world-class performance.”

Based in New York, Shen Yun Symphony Orchestra comprises musicians from Shen Yun Performing Arts, which has expanded to six touring groups since its debut in 2006. This year marks the fourth straight year that the orchestra has traveled to Taiwan.

Wu explained that this is the third time seeing a Shen Yun performance. He added that he felt quite honored that Shen Yun was able to travel to Pingtung—a city in the southernmost part of Taiwan.

Wu’s wife was likewise full of praise for what she saw and heard, before adding that she felt positive energy coming from the music.

“I felt like the music touched me on a different level. And it gave me such an overwhelming feeling that I couldn’t explain,” she said. “I am just blown away.”

Shen Yun Symphony Orchestra is one of a kind, for it successfully blends a full-sized symphony orchestra with traditional Chinese instruments.

Shen Yun explains on its website that Chinese instruments, such as erhu and pipa, have their own characteristics; and it is not easy to blend them with a Western orchestra to create a “fresh, harmonious sound.”

“Shen Yun music brought to my soul a sense of peace, and it also allowed me to reflect on different things,” she added. “I felt like I was at the highest [spiritual] level that humans can possibly attain.”

Wu’s wife said that she would be back for another performance because Shen Yun allowed her to “enjoy a great feeling.”

Shen Yun Symphony Orchestra will travel to Taiwan’s capital Taipei on Sept. 23, the third leg of its ts 9-city tour of Taiwan. Then it will return to North America, with a performance in Toronto on Oct. 6.

After leaving Canada, Shen Yun will kick off its U.S. tour with two performances at the Carnegie Hall’s Stern Auditorium in New York on Oct. 12, before traveling to Washington, D.C., Chicago, and Boston.