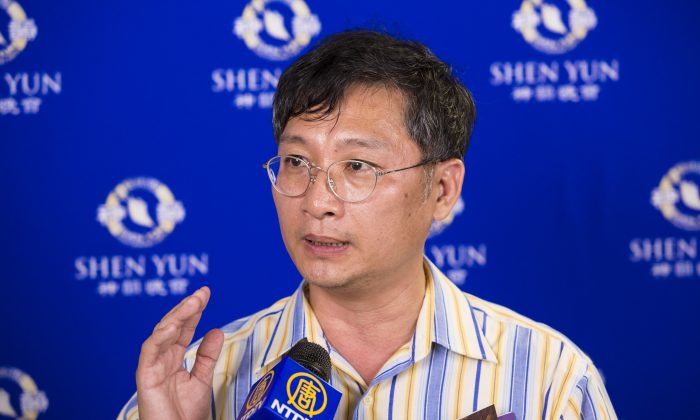 TAINAN, Taiwan—For Tang Cheng-chia, a lifelong classical music lover, taking in Shen Yun Symphony Orchestra’s performance was more than just a music experience; in his own words, the experience was a feast for the soul.

“The music was full of sunlight and positive energy, and it just jolted my soul,” said Mr. Tang, an engineering lecturer at a local university, after seeing the performance at the Cheng-Kung Auditorium in Tainan in southern Taiwan on Sept. 24.

He attributed the great sensation he felt to the dedication of the musicians. “I sensed that every one of them put their life into their music. So what they played was not simply just music, but rather, it was the energy that brings music to life,” said Mr. Tang.

“It struck a chord in my heart.”

In an interview appearing on the Shen Yun’s website, Fiona Zheng, the violinist who performed “Introduction and Rondo Capriccioso,” explained how the energy carried in her performance had much to do with her pre-performance routines.

“I always meditate before I perform. This helps me a lot more than last minute practicing—it makes my music more powerful, and I can feel the energy flowing from every note,” said Ms. Zheng.

The energy came to a climax with the final piece of the performance “Divine Compassion,” said Mr. Tang, who said he truly felt “the positive energy of compassion.”

Mr. Tang expounded on the compassion he felt by putting into words the journey he had gone through when listening to the final piece.

“It began with something gentle and soft, which was followed by a huge thunderstorm,” said Mr. Tang. “The thunderstorm is a presentation of the difficulties people face in life; it is a dark force.

“And at the end [of the music], a powerful, warm energy came to resolve everything,” added Mr. Tang, explaining that this was precisely the power of compassion.

Unlike other orchestras, said Mr. Tang, the energy from Shen Yun stayed with him even after the performance came to an end. As a result, he said the performance itself was just like an inspirational class.

“I believe we should hear more of this music so people can carry out their life full of energy. And I have heard that music can cure illnesses,” said Mr. Tang.

In ancient China, music was considered a cure for illness, for it could heal a person’s soul that medicine could not. The Chinese character for medicine actually originated from the character for music.

Mr. Tang was happy that he had a chance to be a part of what he called a “musical feast.” He said he was also ecstatic that he had a “huge feast” for his soul with the performance.

He called on others to come to enjoy the performance for themselves. As for the reason, he said:

“Because you will enjoy the glory of life, the beauty of life, for what you hear is not just music, but it is the power of life that is in full display.”