Taipei Mayor: Shen Yun Is ‘A Cultural and Artistic Performance’ 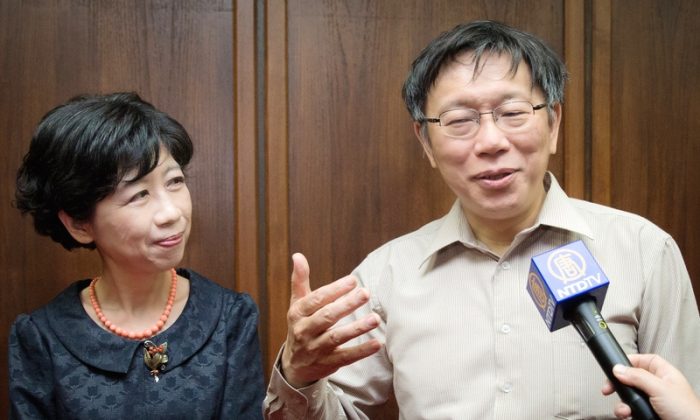 TAIPEI, Taiwan—”Excellent,” exclaimed Mayor Ko after seeing Shen Yun perform. Nicknamed Ko P (Professor Ko), the doctor turned mayor said that he has been extremely busy since he took office in January. Therefore, he availed himself of the consecutive holidays marking Tomb Sweeping Day to see the Shen Yun performance.

Taipei Mayor Ko Wen-je was accompanied by his wife Chen Pei-chi. Mr. Ko said, “The dances, animated digital backdrops, costumes, colors and the design of the show are truly exquisite and fancy. From the beginning to the end, the program is very compact. It’s an international class artistic show.”

Amazed by Shen Yun’s seamless coordination and dancers’ performance Mr. Ko said, “The dancers performed so wonderfully … Their techniques and skills are at the top level. It’s indeed not easy to reach such level.”

As a mayor who especially emphasizes administrative effectiveness and efficiency, Mr. Ko said the performance is full of variety. “I watched the show very attentively. I practically concentrated (all my attention) on the performance.”

Through its vivid presentation of dance, music, and storytelling, Shen Yun introduces audiences to the spiritual essence of traditional Chinese culture, conveying themes such as benevolence and justice, propriety and wisdom, respect for the heavens, and divine retribution.

“The performance is full of sincerity, compassion and beauty, and it also showcases stories about the principles of truthfulness, compassion and tolerance. I think it’s great to do so. If possible, (we should) take the bright road of life, and use the power of compassion,” he said.

Seeing Shen Yun for the second time, Ms. Chen was in awe at Shen Yun’s magnificence. She said, “The animated digital backdrops are very vivid and lifelike.”

She was referring to the state-of-the-art graphics technology used to create vividly animated settings on the digital backdrop behind the stage.

“Every piece is very unique. Its music and dance are excellent. The performance of the two vocalists and the erhu artist are very impressive too,” Ms. Chen added.

A hallmark of the company’s productions is the vocal soloists’ use of bel canto operatic technique to sing Chinese lyrics.

Fascinated by Shen Yun’s magnificent performance, she said, “I’m delighted to see the show together with the mayor. The show is indeed wonderful and beautiful.”